In the Hamilton Capital Global Bank ETF (HBG), we expect U.K. banks, including the so-called “challenger banks” over time, to represent between 5-10% of the ETF. However, in HBG’s first year, the prospect of Brexit resulted in much lower weights (generally between zero and 5%). In addition, we also consistently hedged our pound currency exposures.

However, our positioning on the U.K. (and the U.S.) has recently shifted after the powerful post-U.S. election rally. First, we increased our U.K. and Irish bank exposure from ~4% to ~9% and we removed the pound currency hedges. Since HBG was launched, the pound has declined ~20% versus the Canadian dollar. In fact, relative to the CAD, as the chart below highlights, the GBP has reached this level only a few times since currencies became free floating post-Bretton Woods (1971). 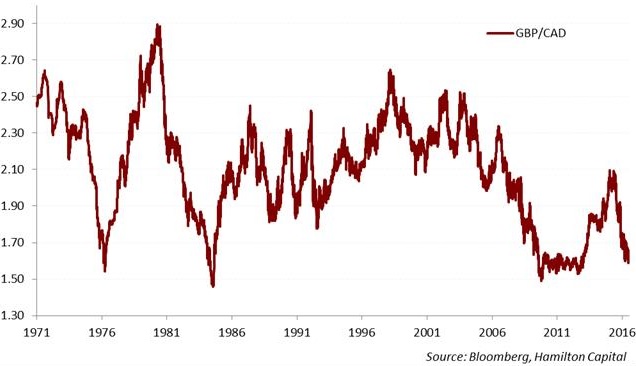 Second, after a massive rally in U.S. banks, we reduced our U.S. holdings from ~46% to ~41% as their multiples surged higher in absence of any material change in EPS estimates. We expect to return our U.S. bank weighting to ~50% in the coming weeks/months depending on market movements and developments related to tax reform.