HBG is up 10.3% YTD (through October 31st), making it 13% ahead of the KBW Global Bank Index (CAD). HBG continues to generate very consistent performance, with comparatively low drawdowns versus global bank indices, and U.S. banks, in particular. For example, the ETF has experienced only 5 negative months, versus 8 for the Canadian banks and 9 for the U.S. banks.

HBG’s return also compares very favourably with other developed market global bank indices, including the U.S., Japan, and Australia, and is in line with the U.K. and Canadian banks, but lower than the European banks. Emerging market banks have performed very well YTD, with Chinese banks – which HBG does not hold – rising 15% in CAD.

Of note, the U.S. banks – which account for over 40% of HBG’s portfolio – have had a very difficult year as a group, with the regional banks performing the worst (over this period, the KRE was down 0.4% in CAD and up 3.9% in USD). Although U.S. mid-cap banks represent (by far) the largest percentage of HBG, it was still up over 10% YTD. One of the reasons for HBG’s strong performance despite U.S. banks large allocation and underperformance is the superior EPS growth of the ETF’s U.S. bank holdings supported by their “high teens” average EPS growth.

This is the fifth consecutive quarter where HBG’s U.S. mid-cap bank portfolio experienced higher EPS growth than the mid-caps, the universals, and the large regionals as highlighted by the chart below. 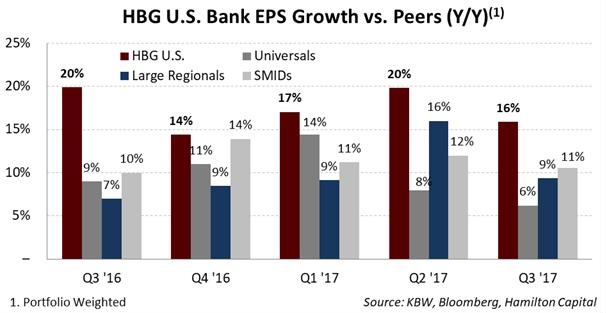 As we have noted in the past, with ~180 U.S. mid-cap banks (i.e., those with market caps between $0.5 bln and $20 bln), there is greater opportunity to construct a portfolio with superior earnings potential and more targeted attributes including higher rate sensitivity, M&A potential, higher loan growth and valuation support.