We are pleased to announce the launch of the Hamilton Capital Global Financials Yield ETF (HFY), which will begin trading on the TSX on Tuesday, February 7th. The objective of the ETF is to offer attractive distribution potential. Put differently, our aspiration is for the ETF to have “REIT-like yields, but with positive rate sensitivity”. Although REITs were recently separated from certain financial services indices (for example, U.S. financials index), we continue to consider REITs to be part of the “financial services” universe. As such, REITs are part of HFY’s investment universe and the ETF may often have exposure to these firms, both real estate and mortgage REITs.

In general, we favour adding REIT exposure when we are concerned about market risk (from either a correction or concerns of heightened macro risk) and/or when interest rates are falling. Which brings us to the current market environment, i.e., one in which an increasingly large number of investors believe the market is entering a multi-year period of rising rates. REITs generally do VERY poorly in this type of market relative to the financials.

The trend for rates has been clearly downward for several decades. To illustrate REIT underperformance during periods of rising rates, the table below highlights 12 separate periods in the last 15 years when rates increased significantly (using the 10 Year U.S. Treasury). The table underscores the generally powerful inverse relationship in performance between REITs and the financials. In these periods, the U.S. and global financials both outperformed the REITs by over 800 bps on average – a highly material difference. It also highlights the magnitude of potential REIT underperformance versus the financials should rates in fact undergo a multi-year period of increases (i.e., normalization). 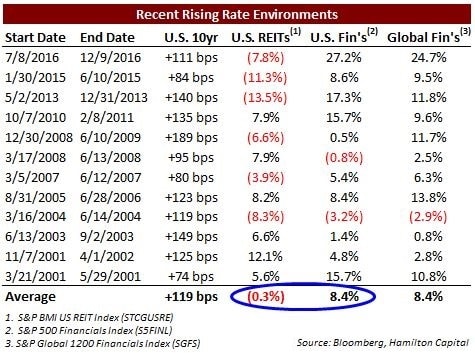 HFY Remains a Potential Substitute for REITs
Not only did REITs underperform the financials during these periods, they often declined in absolute terms. As a result, REIT investors that believe the medium-term trend for rates is up will understandably be concerned about the expected impact on REIT valuations. As shown above, history suggests the financials could materially outperform REITs during a period of interest rate normalization.

Thus, investors holding REITs for yield could consider the soon to be launched Hamilton Capital Global Financials Yield ETF (HFY) as a potential substitute, as it is expected the ETF will have a yield comparable to the 4.8% average of the largest REIT ETFs (namely ZRE, XRE, VRE, RWR and VNQ). Given that financials are under-earning in this ultra-low rate environment, it is reasonable to also conclude that the earnings growth for the financials would exceed that of REITs, and therefore, the growth in payouts could also be higher.

Notwithstanding our expectation for rising rates, should the interest rate environment change unexpectedly or the market environment appear to possess a heightened risk of a correction, HFY has the option to add to its REIT exposure to both buttress its yield and/or reduce the ETF’s volatility.