In our Insight “European Banks: Sector Profitability Almost “Normal”, Reaching ~€90 bln in 2015”, we highlighted that the sector has seen  ‘core’ earnings recover to ~€90 bln, which represents a near complete recovery in earnings to pre-cycle (2007) levels. However, at the same time, European bank index levels are closer to levels last seen at the peak of the sovereign debt crisis (2011/2012).

Given the near complete recovery in earnings for the overall sector, it is clear that ‘macro’ issues are the dominant variable impacting bank valuations. One of the most important issues underpinning the harshly bearish sentiment is the perceived impact of negative rates on European bank profitability, which are implemented by the European Central Bank (and certain other countries). Invariably when negative rates are referenced in the financial media/market commentators, the policy is not only described as harmful, but as being outright menacing, to bank profitability.

The reality is quite different.

In this Insight, we focus on the eurozone-only banks which represent over 50% of European bank assets, and are of course the most directly impacted by the negative rate stance adopted by the European Central Bank (ECB) in June 2014. To be clear, from an investor perspective, we would prefer the ECB or other central banks not adopt negative rates, as the relentless criticisms of this unorthodox monetary policy places a heavy burden on the confidence of their banking systems.

In our view, notwithstanding the near normalization of sector profitability, lower valuations in all of the European banks (i.e. not just those in the eurozone) can be directly linked to the lack of confidence caused by the perceived impact of negative rates (among other issues). This is reinforced by a virtual tidal wave of market/media commenters stating with total confidence that negative rates are very harmful to bank profitability, even though this is not supported by trends in actual bank profitability (or at a minimum overlooks other compensating factors).  For example, in 2015, net interest income for the eurozone banks actually increased 3.4%, its highest growth rate since 2009.

If you are looking for evidence that negative rates are having any harmful impact on eurozone bank profitability, you will not find it in the following charts, which show that: (i) profitability continues to recover with ‘core’ earnings rising 60% in 2015 (chart #1), (ii) negative rates are not having any discernable – much less material impact – on reported margins (chart #2), and (iii) loan growth and GDP in 2015 were at their highest levels since 2010 (chart #3 and chart #4). 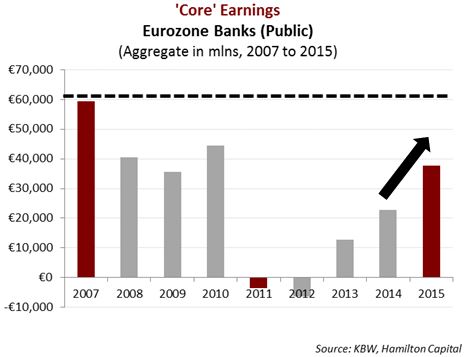 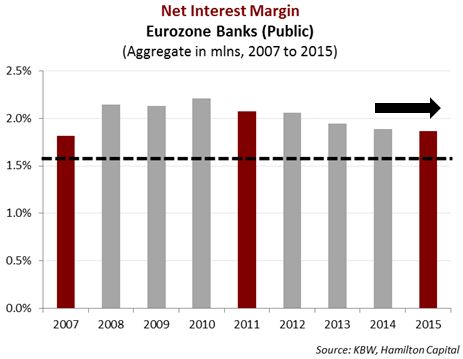 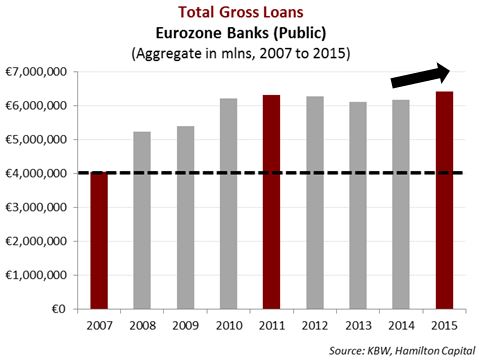 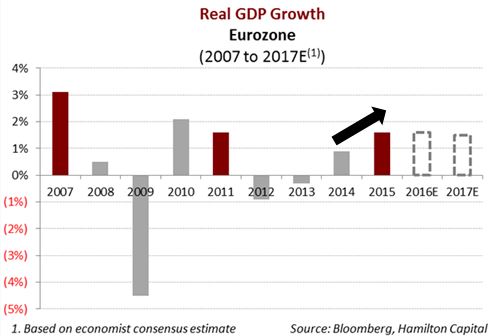