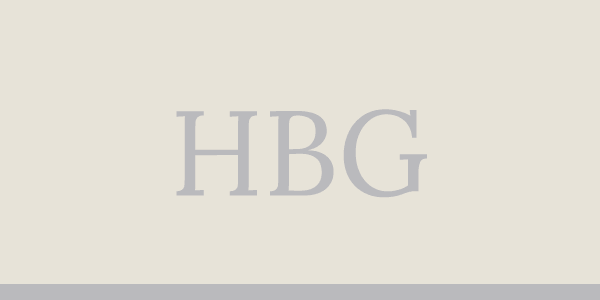 In Q2 2019, the holdings in the Hamilton Global Bank ETF (ticker: HBG) reported portfolio-weighted EPS growth of 14% Y/Y[1], driven by robust U.S. banks fundamentals (~55% weight) and a diversified portfolio of global banks (~45% weight). This is the twelfth consecutive quarter of double-digit portfolio-weighted EPS growth for HBG. The strong growth was led by U.S. banks (especially mid-caps operating in southeast and southwest), India, Singapore, and select holdings in Europe.

Yet, despite this excellent fundamental performance, valuations remain at five-year lows as the holdings of HBG trade at a portfolio-weighted average of a full 16% below this average and as recently as last summer. Amid increased global growth worries and trade related uncertainty, a flattening yield curve has weighed on stock prices which when combined with this strong EPS growth has resulted in multiple compression. However, with global growth forecast to remain over 3.0% this year and next, the rationale for global diversification remains strong.

The robust EPS growth in the quarter has supported HBG’s strong absolute and relative returns since inception. Since its 2016 launch, HBG has generated an annualized return of ~9%, despite absorbing three severe macro corrections (Brexit vote, yuan devaluation threat and last year’s recession fears related sell-off). It also continues to generate substantial outperformance and is 25% ahead of the global banks[2].

However, as mentioned, despite strong fundamental performance, the underlying holdings of HBG trade at a substantial discount to their 5-year averages (see below) offering the potential for multiple expansion as global growth fears recede. 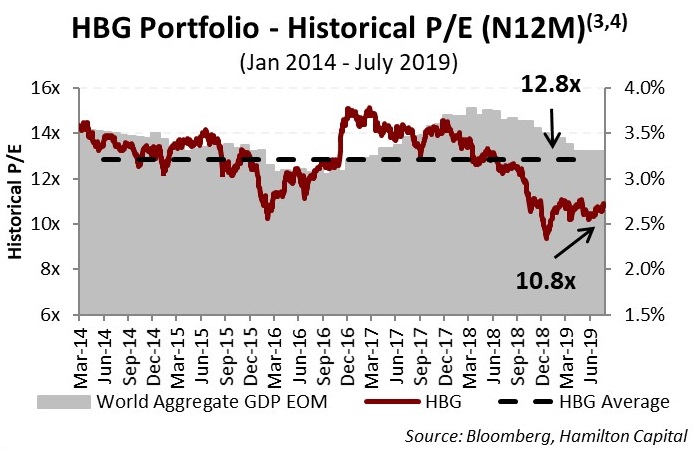 Strong and Consistent EPS Growth Across Most Regions

The chart below highlights the strong and consistent earnings growth of HBG’s holdings over a three-year period. The robust earnings trajectory underscores the portfolio’s excellent fundamental performance driven by stock selection and geographical allocation. 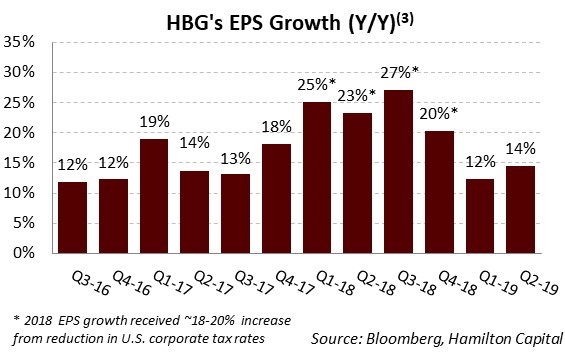 In Q2, HBG’s strong EPS growth was broad-based and, in particular driven by holdings in the U.S., India and Singapore. The U.S. portfolio generated EPS growth of a healthy 10% even as the impact of the 2017 U.S. tax reforms waned and interest rate expectations turned progressively more dovish. An emphasis on higher growth states and metropolitan statistical areas continued to support EPS growth in the quarter. It is also the reason why the U.S. portfolio of HBG has experienced higher EPS growth than the U.S. large-cap banks 12 of 13 quarters since inception. We also continue to believe that consolidation in the U.S. mid-cap banking sector is likely to accelerate in the next two years and with over 20 U.S. mid-caps in HBG, we remain optimistic that this trend will be beneficial to unitholders.

Benefits of global diversification were evident across other major markets, most prominently Asia (India and Singapore). Across nearly all major global economies, credit quality remains robust and credit environment is expected to remain benign. In India, credit normalization (and declining provisions) continued to drive bank profits higher. In Europe, the low interest rate environment continued to support credit quality even as margin pressure accelerated. The region’s slowing economy and political uncertainty dominated headlines and resulted in cautious guidance from banks.

The global banking sector continues to trade at large valuation discounts to five-year averages, offering the potential for multiple expansion. With the current holdings of HBG trading at ~10.8x P/E, a nearly ~16% discount to their five-year average, we believe the global banks represent a very strong risk/reward while providing diversification.

[1] This figure is with ~85% of HBG having reported and assumes remaining holdings report EPS equal to consensus. As of the time of writing this note only seven banks had not reported the corresponding calendar quarter, including two Canadian, two Chinese banks and a Norwegian bank. Australian banks report semi-annually.
[2] The KBW Nasdaq Global Bank Net Total Return Index, GBKXN, in Canadian dollars through July 31, 2019.
[3] Portfolio weights as of July 31, 2019
[4] GDP data is a blended forward 12 month forecast of annual estimates. Data prior to September 30, 2014 uses actual GDP growth (versus market forecast).