Over the past several months, there has been a lot of discussion about the potential for Canadian home prices to fall and the possible impact on the Canadian financials (and banks, in particular). After a near-vertical rise in over the past decade (see chart), Canadian home prices appear vulnerable to a decline. The speculated impact of a decline on the domestic financial services sector has ranged from: (i) slower economic growth causing slower revenue growth (most likely), to (ii) a credit downturn (a possibility), or worse, (iii) some sort of systemic event (highly unlikely, in our view).

Note to Reader: In our January 2013 comment, “For MICs, Time for Caution?”, we explained why the risks of certain MICs were, in our view, rising dramatically, as the risk of a correction in home prices grows. We cautioned investors/advisors to be extremely careful in relying on loan‐to‐value as a measure of collateral protection on development loans, or taking comfort in the absence of historical losses, among other things. [/panel]

Disclosure: At the time of writing, no HCP Fund, account or staff member had exposure – long or short – to any MIC investments.

This issue has gained further investor attention with the potential for interest rates (and therefore, mortgage rates) to rise sooner rather than later, and possibly materially. While rising rates is an important issue in and of itself, its significance to investors is magnified by the fact it could be the catalyst for a correction in housing. 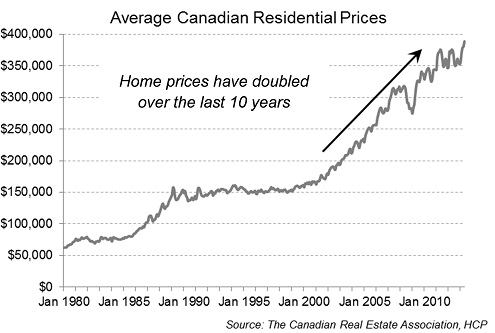 The potential for a hard landing in home prices has many Canadian investors concerned given what happened to the U.S. financials during that country’s recent housing correction. In the U.S., rapidly falling home prices was a significant (but far from the only) driver of the severe credit cycle that ultimately evolved into a full-blown banking crisis.

No Evidence of a Canadian Credit Downturn … Yet
Interestingly, despite the blizzard of commentary and press coverage speculating on the potential for a housing correction in Canada, home prices have not actually started to decline. According to the Canadian Real Estate Association, after rising ~35% in the previous five years and nearly doubling over the past decade, the average home price in Canada has stabilized since late 2010. In fact, in May, the average price actually increased almost 4% year-over-year.

That said, we are not sure how much comfort investors should take from these trends, since we believe the real test for the domestic housing market and the Canadian financials will be the impact of rising mortgage rates. In May, the process of global interest rate normalization appears of have begun, and with it, rising mortgage rates.

Which brings us to MICs.

Why Losses in Certain MICs Might Be a Sign of Losses to Come Elsewhere
Many speculate that a credit downturn could be triggered by a decline in home prices, particularly a hard landing versus the soft landing predicted by most financial services executives. If a credit downturn was to emerge, we believe that mortgage investment corporations (MICs) might be this cycle’s “canary in the coal mine”. By this, we mean that if there is a downturn in credit, it is possible that the first evidence of losses in the Canadian financial system could emerge within certain lower quality mortgage investment corps (and this is a plentiful universe!).

In a falling home price environment, the first credit losses tend to emerge in low-quality/junk residential mortgages, as well as land development and construction loans. In the most recent U.S. credit cycle, subprime lender New Century was quickly overwhelmed with losses and failed in early 2007. This failure and HSBC’s (surprise) pre-announcement of higher subprime losses (February 2007) were among the first real signs of an emerging credit downturn in the U.S. 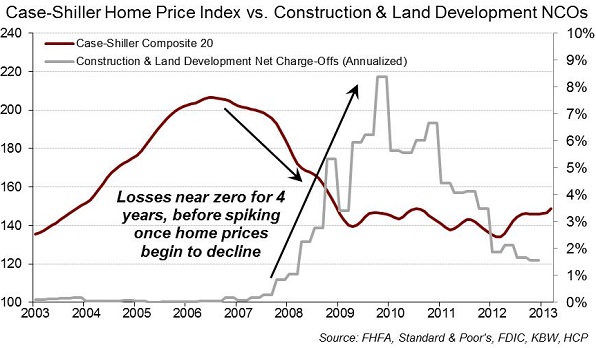 Less well known is that after a multi-year period of essentially zero losses([2]), U.S. construction-heavy banks began to experience a decline in credit quality at almost the exact same time as home prices began to decline.

We would also note that since accounting for land development and construction loans allows for significant subjectivity, reported loss emergence for some lenders was delayed by several quarters, which helps explain why losses basically exploded in 2008. This liberal accounting means that investors need to be aware that in a rapidly falling home price environment, reported GAAP results for construction lenders can significantly obscure a severe deterioration in credit quality – at least for a period of time.

In Canada, investors do not have any pure-play subprime/junk lenders to serve as indicators of losses to come, primarily because it is an “originate and hold” market of which the Canadian banks dominate. However, there are essentially pure-play development lenders within the MIC universe – i.e., those with heavy concentration of land development and residential construction loans.

Of course, as mentioned, it is important to note that Canadian home prices have not – yet – started to decline. So for now, real estate loans and lower quality MICs continue to enjoy significant collateral support, which explains their absence of losses. That said, MIC Investors should be aware that land development and residential construction loans are tremendously sensitive to falling home prices, particularly if there is a hard landing.

Should it Occur, a Hard Landing in Home Prices Will Matter
In our opinion, prudent investors should assume in their investment thesis that Canadian home prices do decline, and allow for the possibility that this decline is material (i.e., 10% to 15%). The hard landing in the U.S. was caused by a collapse of a mortgage market after a near catastrophic decline in lending standards by the largest originators, Countrywide and Washington Mutual. These giant thrifts accounted for an astonishing 20-25% of all originations in the five years preceding the Credit Crisis. On the bright side, an epic collapse in lending standards did not occur in Canada, which should imply a softer landing.

However, if there is a hard landing, it will matter – a lot. In that scenario, the question will not be if there will be a negative impact on the financials, but when, and how much? In our view, the impact on the Canadian financials sector will vary.

For the most diversified lenders, like the Canadian banks, the impact will likely take the form of lower earnings growth, as opposed to some sort of cataclysmic event causing their stocks to decline materially or, as speculated by some, requiring them to raise capital (watch for our note next month in which we will detail our view on the Canadian banks).

The same cannot be said for the smaller alternative mortgage lenders. If the Canadian housing sector experiences a hard landing, then loss emergence for these essentially monoline lenders is likely to be material. If it is a soft landing, they will probably experience higher, but manageable, losses and an extended period of slower originations.

However, should evidence of a credit cycle emerge, we believe it is most likely to come from certain low quality MICs, i.e., those with large exposures to construction and land development loans. We have seldom seen such high credit risk loans in any vehicle so casually dismissed by so many as we see with MICs, a part of the market that desperately needs to avoid a hard landing in home prices. We believe investors should approach this group with extreme caution, and pay attention to any losses emerging in these vehicles, as they may well be the “canary in the coal mine” for losses in the other Canadian financials.

[1] An important caveat is that, over the past several years, the Canadian banks have made aggressive use of the “Other” or “Corporate Support” segments, which has made analyzing segment trends more difficult and less reliable.
[2] Unfortunately, the FDIC only began to break out quarterly losses for construction and development loans in 2003.