In this series on Chinese banks, we have been evaluating the risk that distress in the system triggers a global sell-off. In the first two parts, we assumed that the Chinese government’s reported statistics are unreliable and hence obscuring the true financial distress of the sector. Then, to help investors understand these systemic risk issues, we presented the arguments supporting the bear case (Part #1), as well as the bull case (Part #2).

In this, Part #3 of this series, we assume that the reported government statistics are reliable (or at least not materially misstated), and on that basis, review the solvency of the Chinese banking sector. To do so, we reviewed reported metrics for profitability, asset quality, reserves, and capital with the objective of assessing financial stress. We offer this review in a question and answer format. 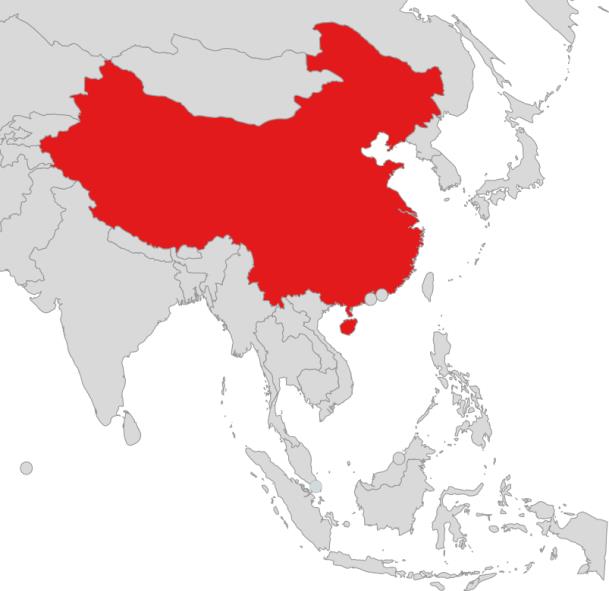 The Chinese banking sector’s health is obviously important given the sector’s enormous size, both absolutely and relatively. And with concerns over a slowdown in China weighing heavily on markets in recent months, a review of the country’s banking sector and its solvency is highly value added.

Q: Is the Chinese banking sector important from a global macro perspective?
A: Yes, at ~US$25 trillion in assets (and growing rapidly), the sector is highly material 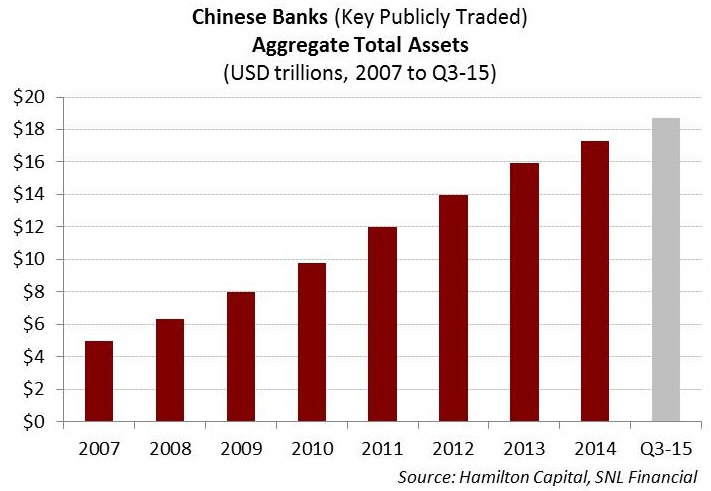 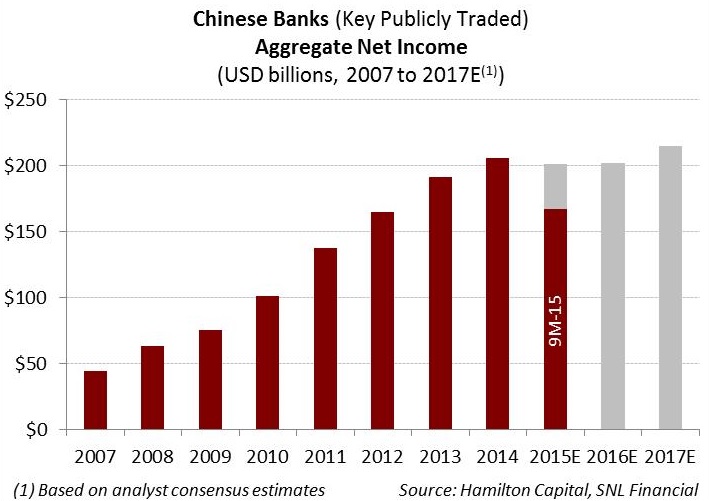 Four of the five largest global banks are in fact Chinese (representing ~US$11 trillion in assets). Moreover, total assets of the Chinese banks are ~2.5x larger than the country’s GDP, making China a global outlier (for reasons we discussed in Part #2).

The country’s very high reported annual GDP growth means the sector’s importance relative to its global peers continues to grow. To illustrate, in less than five years, the total assets of these 20 Chinese banks have nearly doubled from US$10 trillion in 2010 to US$19 trillion in Q3 2015, outpacing the country’s leading GDP growth of ~6-7% per year.

As a result of the Chinese banking sector’s enormous size, its health is highly relevant to the global markets.

Q: Are credit trends for Chinese banks negative?
A: YES – A clear deterioration in credit quality is evident (and accelerating)

In 2010, the ratio of annual credit losses as a percentage of loans for the Chinese banks was ~50 bps, which would be considered pretty close to “normal” for Canadian and U.S. banks. This ratio – which impacts the income statement – has shown clear deterioration over the past three years, rising to ~55 bps in 2013, ~80 bps in 2014 and close to 100 bps in H1 2015 (see chart below – LHS)[4]. In addition, several banks within this universe are experiencing much higher loss ratios, with the highest (a smaller bank) being over 300 bps in its most recently reported quarter[5].

Unsurprisingly, trends in impaired loans as a percentage of gross loans are showing a similar level of deterioration. While this ratio is still relatively low at ~1.5% as of Q3 2015 (see chart below – RHS), it was less than 1.0% just six quarters ago, meaning the level of impaired loans as a percent of the entire portfolio has risen 50% since year-end 2013. Although these ratios imply clear/pronounced deterioration, they are not even close to approaching levels that would cause (most) investors to begin worrying about financial distress (again, assuming reported data is reflective of reality). 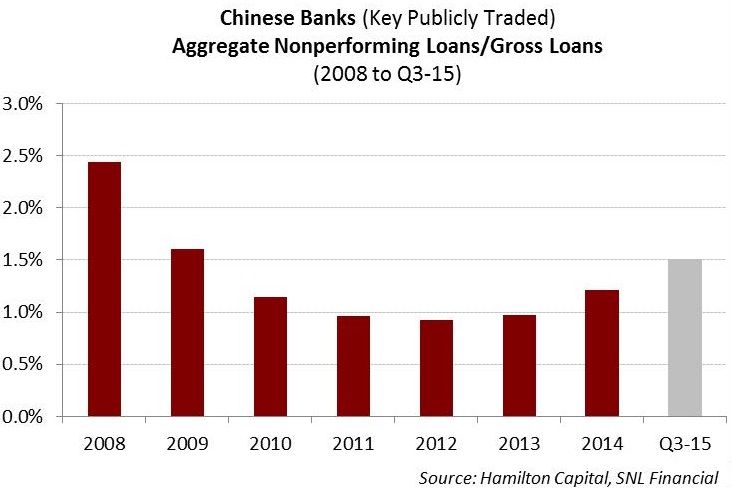 Q: What do the basic balance sheet ratios say about health of the system?
A: While deterioration is clearly evident, ratios imply a large cushion against distress to the system

Two of the most important indicators to evaluate the health of a banking system are capital adequacy and reserve adequacy. On these measures, the Chinese banks compare favourability to their global peers. The leverage in the banking system is ~15x (see chart below – LHS). This would not screen as particularly high, especially given the sector’s very high reported ROE ratios add another layer of cushion against unexpected/unrecognized losses. As for level of reserves against future problem loans, the Chinese banks have a reserves-to-gross loans ratio of ~2.8%, which has been relatively stable over the past three years (see chart below – RHS) and, again, compares very favourably to global peers. 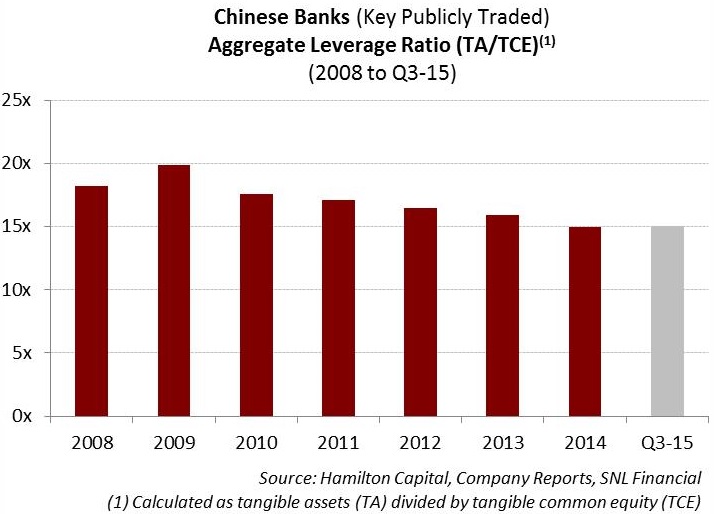 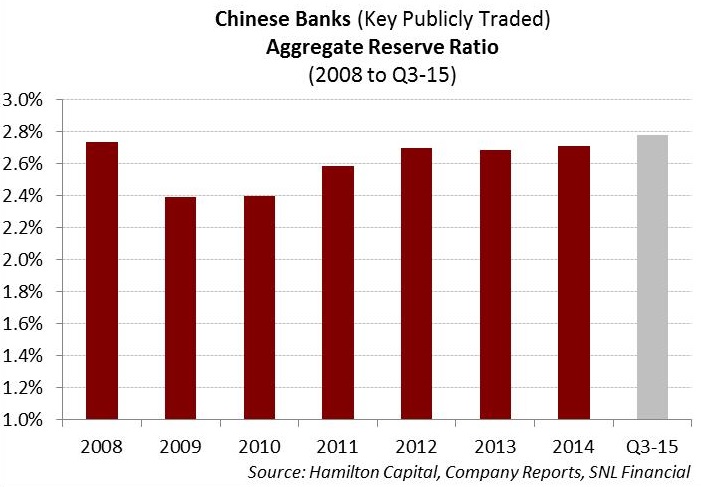 Q: Are Chinese banks taking steps to cope with declining asset quality?
A: No, or at least not yet; Cushions are declining (although remain well above levels implying distress)

The Chinese government requires its banks to operate at very high coverage ratios[6], as evidenced by the current ratio of ~185% (see chart below – LHS). However, as the chart highlights, the aggregate coverage ratio for these large banks has fallen significantly. Although absolute levels of reserves have increased in the past few years (see chart below – RHS), it appears to be accounting for loan growth only, since as mentioned, reserve ratios have not increased proportionately. 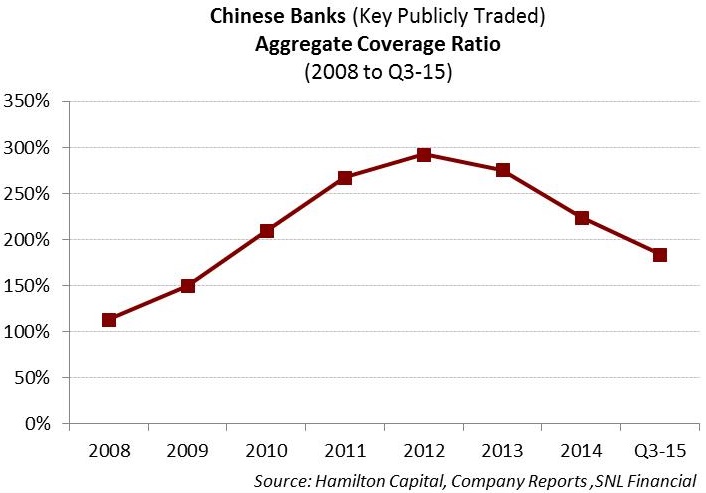 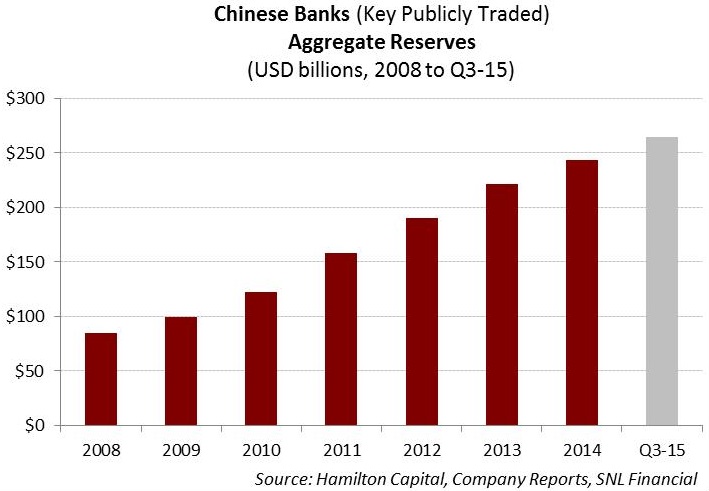 The decline in the coverage ratio and lack of growth in the reserve ratio imply that Chinese banks have not taken steps to build their cushions against observable credit deterioration. In fact, these cushions are actually being drawn down.

Again, if one assumes that reported data is accurate, the Chinese banks screen as healthy. Reported profits are US$200 bln a year in aggregate and ROEs are very high at 17%. Reported problem loans remain relatively modest at 1.5% of gross loans. Balance sheet metrics compare favourably to most global banks, with reserves-to-loans of 2.8%, and leverage ratios of 15x (i.e., tangible assets divided by tangible common equity). Loan-to-deposit ratios are also comparatively low, which combined with very little market-based wholesale funding, suggest that liquidity risk is very low.

As a result, reported metrics imply that insolvency risk is low.

Moreover, on the issue of the “weakest link”, we would note that the highest impaired loan ratio among our identified universe is a relatively low 200 bps. In addition, we reviewed the credit trends of the policy banks, and they are not materially different from our universe of 20 public banks (both A- and H-shares).

In conclusion, the Chinese banks are clearly experiencing credit deterioration, and that alone is a significant development given both the sector’s and the country’s importance to the global markets. That said, if one believes or relies on reported financial information, the sector would appear to have significant cushions and is a long way from experiencing financial distress, even if the current credit cycle deepens considerably.

(1) Sources for this three part series are SNL Financial LC and Hamilton Capital. The universe of companies consists of 20 major publicly traded Chinese banks, or ~70% of total bank assets in China, all of which the government holds a controlling interest (total assets of ~$17.5 trillion at YE). Our universe does not include the three wholly government owned “policy banks” (i.e. Agriculture Development Bank of China, China Development Bank, and the Export-Import Bank of China) which account for a further ~10% of the total Chinese banking system assets (i.e. an additional ~US$2.5 trillion at YE).

(2) With respect to China, foreign investors can generally invest in only the ‘H’ shares (13 of the 20 public banks in our universe), while domestic investors can also invest in the ‘A’ shares (7 additional banks).

(3) There is not sufficient and/or reliable information to review the implications of Chinese “shadow banking” system (including Chinese wealth management products), to the extent it exists.

[1] H-shares are listed on the Hong Kong Stock Exchange and are available to non-Chinese investors. In contrast, A-shares are listed on the Shanghai Exchange, and are generally only available to Chinese investors.
[2] Five banks represent nearly half of the entire system: Industrial and Commercial Bank of China (ICBC), China Construction Bank (CCB), Bank of China (BOC), and Bank of Communications (BCOM). This does not include the three large policy banks, which are 100% government owned and have total assets of ~US$2.5 trillion.
[3] For these values we are aggregating the total assets of what we consider our investable universe.
[4] For comparison, this would represent a material credit cycle for the Canadian banks, which, like Chinese banks, report ROEs in excess of 16%.
[5] Credit loss data is not reported quarterly on a comparable basis for many of the banks, hence our use of 1H-15. However, Chinese bank asset impairments (which include credit losses) continued to rise in Q3 (on an annualized basis).
[6] Coverage ratio is reserves (or allowances) divided by gross impaired loans. Over a full cycle, most North American banks would operate at ratios of closer to 100%, with the ratio falling entering a credit cycle, and rising during the recovery stage.