The global financials, particularly the banks, have had a very difficult two months, correcting significantly off of their early-December highs. The macro-driven correction has been indiscriminate, with the U.S. large-cap banks (BKX), U.S. mid-cap banks (KRX), U.S. financials (S5FINL), global financials (SGFS), and European banks (SX7P) falling 20%, 20%, 15%, 16%, and 25%, respectively, from their December highs.

Note to Reader: The source for the financial information below is Keefe, Bruyette & Woods (KBW), and the universe is ‘key publicly traded’ European banks (i.e., 67 banks covered by KBW, which represent substantially the entire sector). Source for STOXX Europe 600 Banks Index (SX7P) is Bloomberg.

Despite the indiscriminate nature of the correction, the U.S. financial press has focused heavily on the health of the European banks, despite their continued earnings recovery. Given the already very low level of the European bank index at the start of this correction (~195), the correction has reduced market capitalizations for the sector to levels not seen since the peak of the sovereign debt crisis (the SX7P is now ~145, with crisis trough of ~120 in 2011).

This is despite the fact that – as the chart below highlights – aggregate profitability for the largest European banks is on the verge of reaching €100 bln this year, or  ~90% of pre-cycle. The last time the index was even this low, the profitability of the largest European banks was €38 bln and there were widespread concerns of default of Italy and Spain. The last year that profits were this high, market capitalizations were ~2.5x higher (i.e., index was over 400). 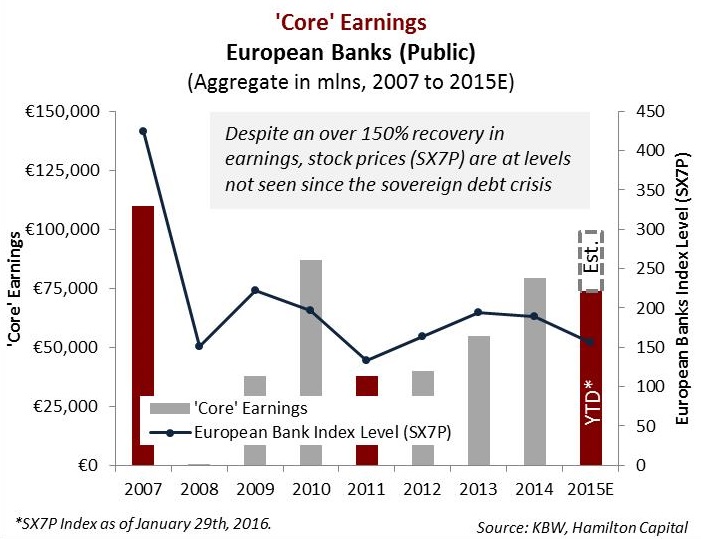 To help investors understand this disconnect between the advancement of fundamental recovery and current valuations, we review various aspects of the key European banks in charts below. For those relating to the European banks specifically, we compared the group at three points in time, highlighted in burgundy: (i) pre-cycle/crisis (i.e., 2007), (ii) near-peak of the crisis (i.e., 2011), and (iii) the present (i.e., Q3-15/2015 full year estimates).

This is signaling that market concerns are over global growth (versus financial distress). 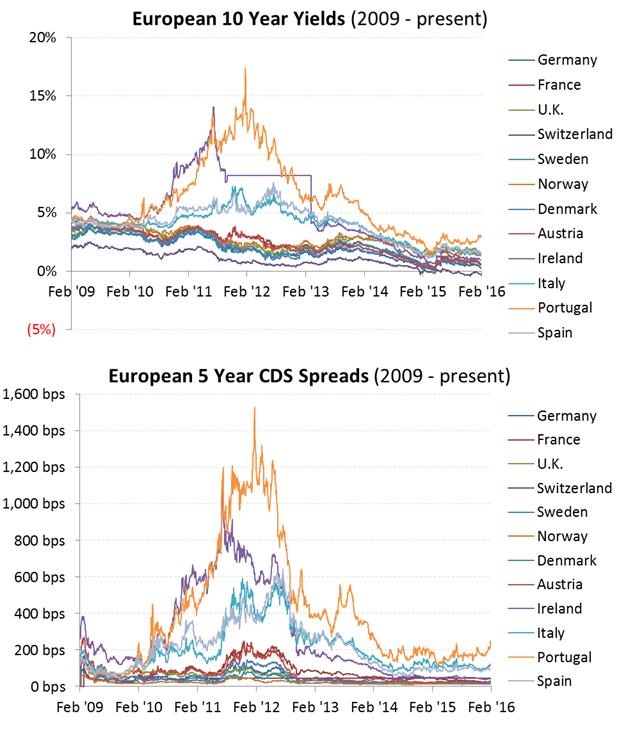 With 2015 “core” earnings expected to be almost €100 bln, a full recovery is approaching quickly. At peak of sovereign debt crisis, earnings were less than €40 bln. 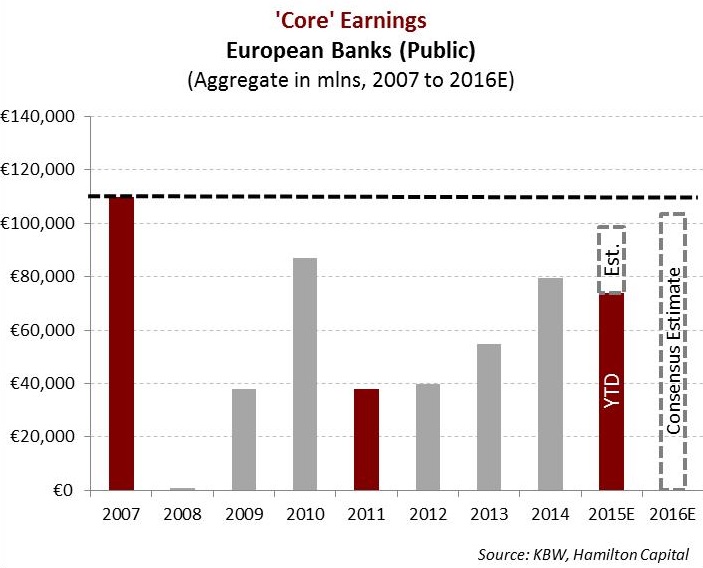 Credit costs and cost of risk ratios are approaching “normal”, which is supporting the recovery in earnings. 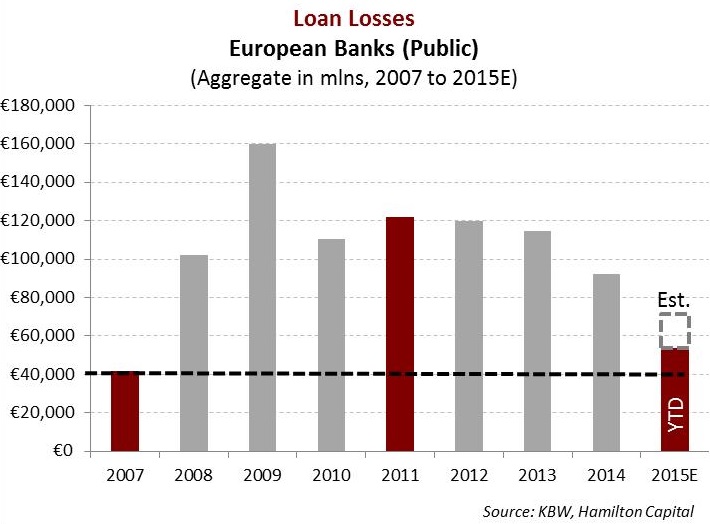 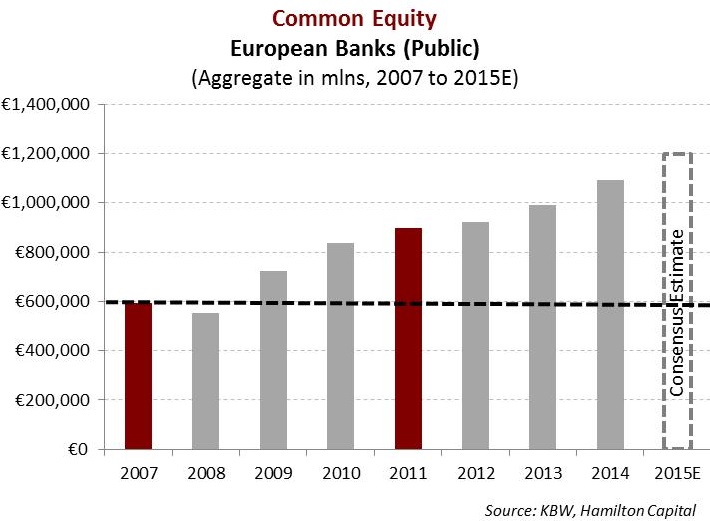 A key capital ratio is common equity tier 1, which as the chart shows, has risen materially from both pre-cycle and peak-crisis levels. 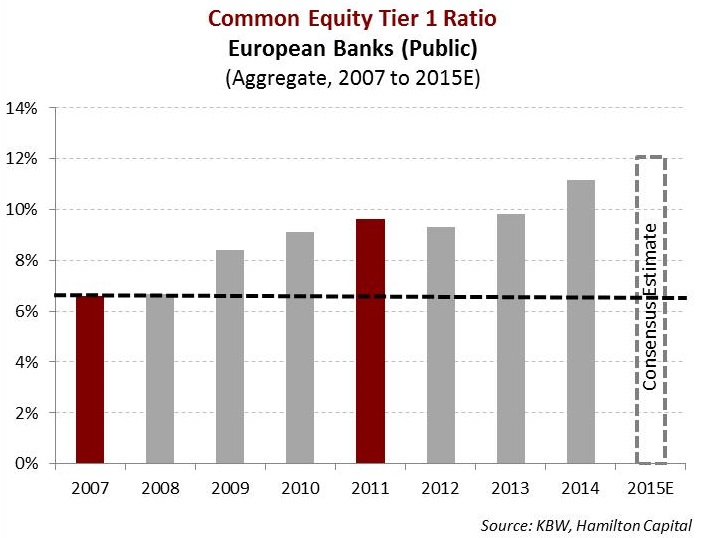 Reliance on wholesale funding down dramatically

Loan to deposit ratios have declined from a very high ~130% to a more stable ~100%, reducing reliance on funding outside of core deposits. 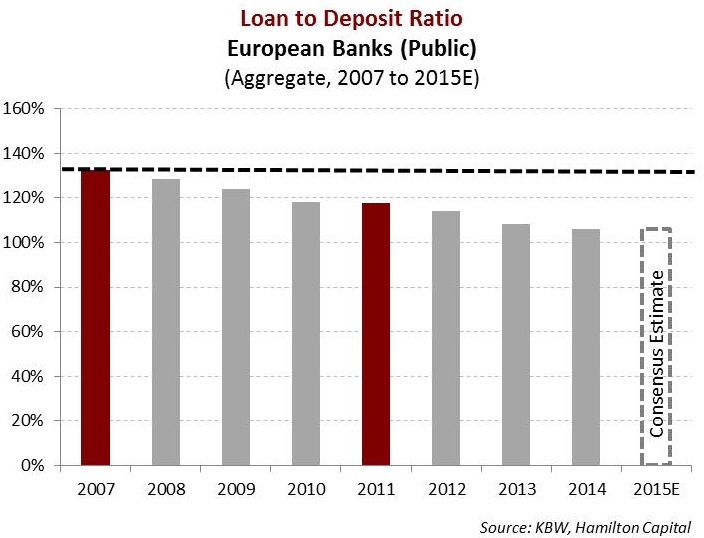 Aided by domestic consolidation, the total size of loan books for the European banks is up 33% from pre-cycle levels in 2007. 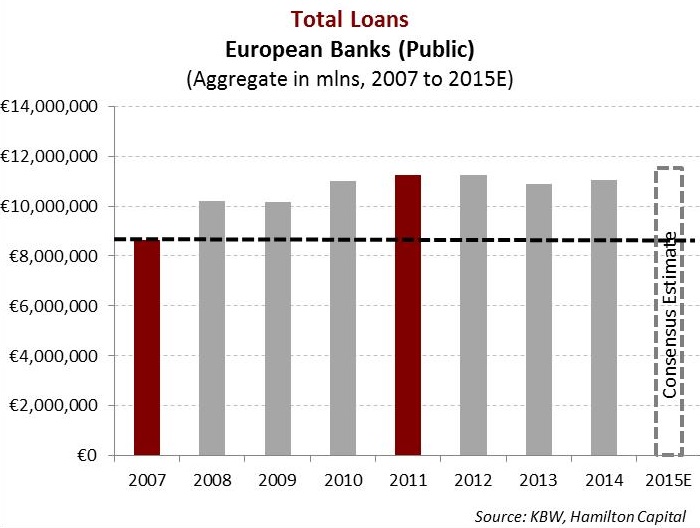 Total deposits for the largest banks are up 66% from pre-cycle, aided by domestic consolidation. 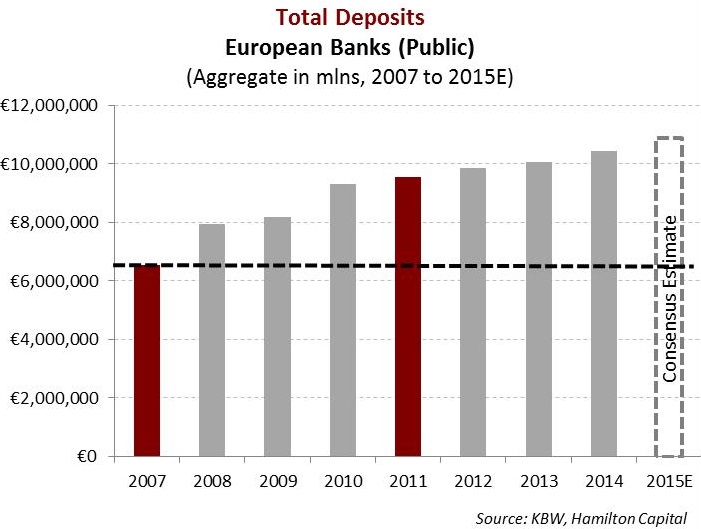 Revenues improving from crisis (albeit slowly) 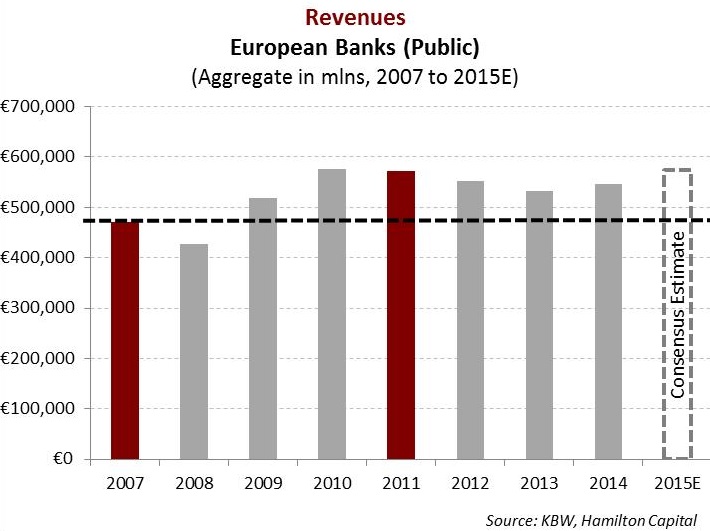