Macro issues continue to dominate European bank valuations as the sector remains in focus, particularly following the recent Brexit vote. Given all of the concerns over European banks, it is worth noting that profitability for the sector has almost completely recovered to pre-cycle levels. In 2007 (the last “normal” year), the European banks made just over €100 bln in “core” earnings. At the same time, the SX7P index was over 400 (see chart below).

In 2015, the European banks generated ‘core’ earnings of over €90 bln, while the SX7P ended the year at ~180 or nearly 60% lower than before the cycle began. Since year-end, concerns ranging from a “hard-landing” in China to Brexit have pushed this widely followed bank index down another 32% to ~125. The European bank index is now 70% lower than the level when the sector last generated this level of earnings.

It is also worth noting that the SX7P was only slightly lower at its local trough levels in late 2011/early 2012, during which time there were serious concerns that four countries, representing ~18% of total European GDP, might default and spread contagion from the world’s largest banking system (bank profitability at that time was less than half its current levels). It is difficult to know when macro issues and their utter dominance over European bank valuations will abate, but it is worth noting that the sector has nearly recovered to earnings levels achieved before the downturn. 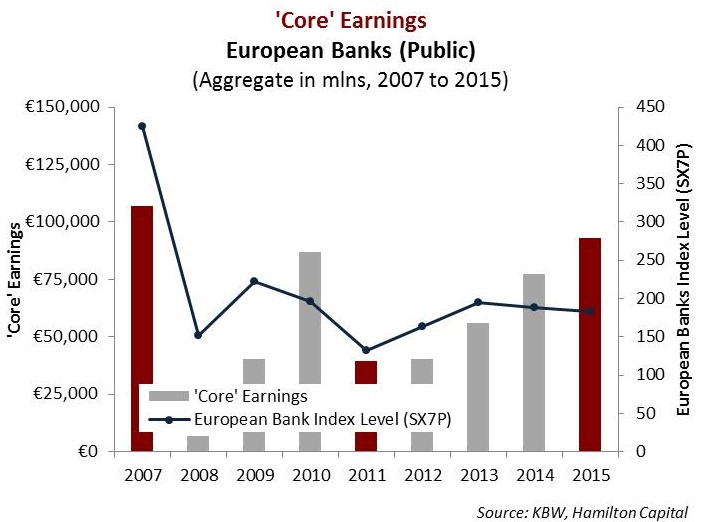