The Hamilton Capital Global Bank ETF (HBG; TSX) is expected, over time, to hold ~25% exposure to European banks. Prominent among the ETF’s identified objectives is to generate yield and to limit volatility. As a result, in the European portfolio, HBG places a significant emphasis on Northern European countries which are – on balance – wealthier than Canada/U.S. and have higher forecast GDP growth, and whose banks have dividend yields, and, of course, significantly higher capital ratios (Canadian banks rank near the bottom globally).

Given the financial press’ overwhelming focus on a few number of banks and/or countries, it is easy to forget that European banking sector is more than just investment banks and/or Italy. In fact, the sector is huge, with over €25 trillion in assets and €1.2 trillion in tangible common equity. Far from being a homogeneous bloc of countries and banks, in fact, Europe – and its banks – is extremely diverse.

This brings us to the recent released results of the 2016 European Banking Authority (EBA) stress tests. The chart below shows the average fully loaded common equity tier 1 (CET1) ratio for the adverse scenario by country for the 51 banks that underwent the recent EBA stress tests. Obvious from the chart is that the range of results is extremely wide, with many banks/countries showing extremely high post-adverse scenario CET1 ratios. Of note, the portfolio-weighted ratio for HBG’s European banks is 12.9% – significantly higher than the average of 10.5%. 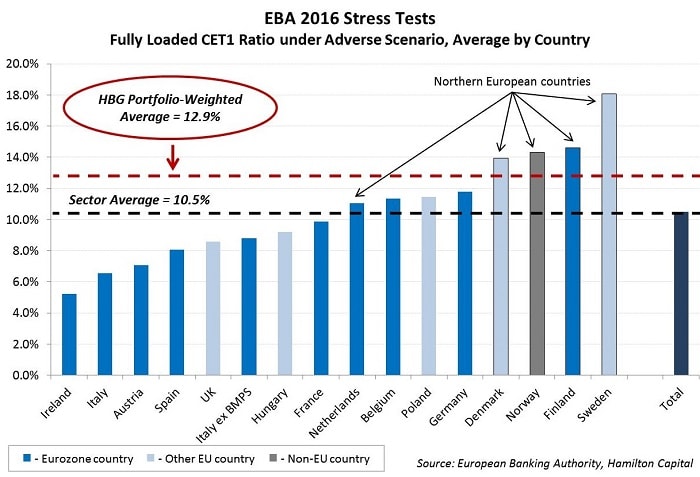