Throughout most of the year, the market has moved easily from “risk-on” to “risk-off”, almost exclusively due to changing circumstances/concerns out of Europe. As a result, the last two years have seen some tremendously volatile months, with large corrections being followed by large rallies.

As we have discussed previously in “Crunch Time for Europe” and “Policy Makers vs. the Markets (Again)”, this dynamic has created a challenging environment for investors, as market direction is being significantly impacted by the (often unpredictable) actions of policy makers. Crisis escalation is frustrating the bulls. Policy responses are frustrating the bears. This dynamic is likely to last for years.

However, for the next few months, Europe is likely to take a back seat to a different macro risk: the U.S. fiscal cliff.

What is the “fiscal cliff”? Broadly speaking, the fiscal cliff refers to the situation whereby U.S. lawmakers have, for several years, deferred critical budgetary decisions owing to their deep philosophical differences over fiscal and tax policy, until right after the Presidential election. So contentious were the differences that the two major parties could not agree to proceed, and essentially opted to fight an election to determine how to resolve them. With $1 trillion in annual deficits and the election now over, the time has come for these difficult decisions to be made.

As the U.S. moves towards this cliff, legislators will need to make decisions regarding both spending reductions (particularly entitlements) and taxation. Given that these decisions have been left unresolved for so long, the problems have grown (the debt now exceeds $16 trillion), and policy choices have the potential to have a very large, negative impact on nominal GDP growth.

How Large is the Problem? BofAML Estimates Over 4% of GDP

According to BofA Merrill Lynch (“BofAML”), the fiscal cliff is equivalent to $720 bln, or a huge 4.60% of GDP. BofAML believes the fiscal cliff is generally being understated, as most estimates only include the changes to the AMT (alternative minimum tax; $120 bln), the expiry of the ”Bush tax cuts” ($180 bln), and the increase in the payroll tax ($120 bln).

However, in BofAML’s opinion, the true estimate of the fiscal cliff should also include (as broken out in the chart below): the impact of a decline in infrastructure spending, tax increases to fund the Patient Protection and Affordable Care Act (commonly referred to as Obamacare), and extended unemployment benefits. Removing this much spending from the economy represents a huge fiscal drag. 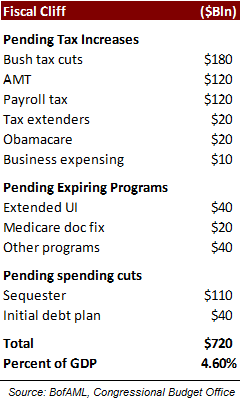 It also more generally highlights the challenges any number of countries face in achieving pre-cycle nominal growth rates of 3-4%, while the global economy is deleveraging.

Many, including us, believe that with the U.S. Presidential election now out of the way, U.S. lawmakers will achieve a “grand bargain” because they have to. The consequences of not reaching an agreement are quite severe, making the political cost also very high.

The election resulted in no change in the makeup of the U.S. government. The President, the Democratic Senate, and the Republican House of Representatives will have to compromise in order to move the country’s fiscal situation to a more sustainable position. The election result would seem to imply that tax increases or the elimination of tax preferences will be part of any deal. It also likely means that the “Bush tax cuts” have a higher probability of expiring, causing tax rates on investment income to rise (and spurring a spate of special dividend announcements across the financial services sector before year-end).

In the Meantime, Europe Takes a Backseat (for Now)

Meanwhile, although most of the developments in Europe continue to be negative, the market has – at least for now – become somewhat inured to the negative headlines. Generally speaking, eurozone GDP growth continues to show weakness, with signs that even the German economy is slowing.

The Troika is effectively in a permanent state of negotiations with Greece over austerity, while giving them just enough money to keep from defaulting. Given the country appears incapable of structural reform, it almost certainly seems like a day of reckoning will come (possibly within the next six months), where the other members of the eurozone simply refuse to provide Greece any more aid. In addition, Spain continues to press for maximum aid, with minimal loss of sovereignty.

Obviously, the issue of macro risk for Europe has not gone away, and it is inevitable that it will re-emerge. In the meantime, it takes a backseat to the U.S. fiscal cliff, the most important looming issue yet to be resolved.