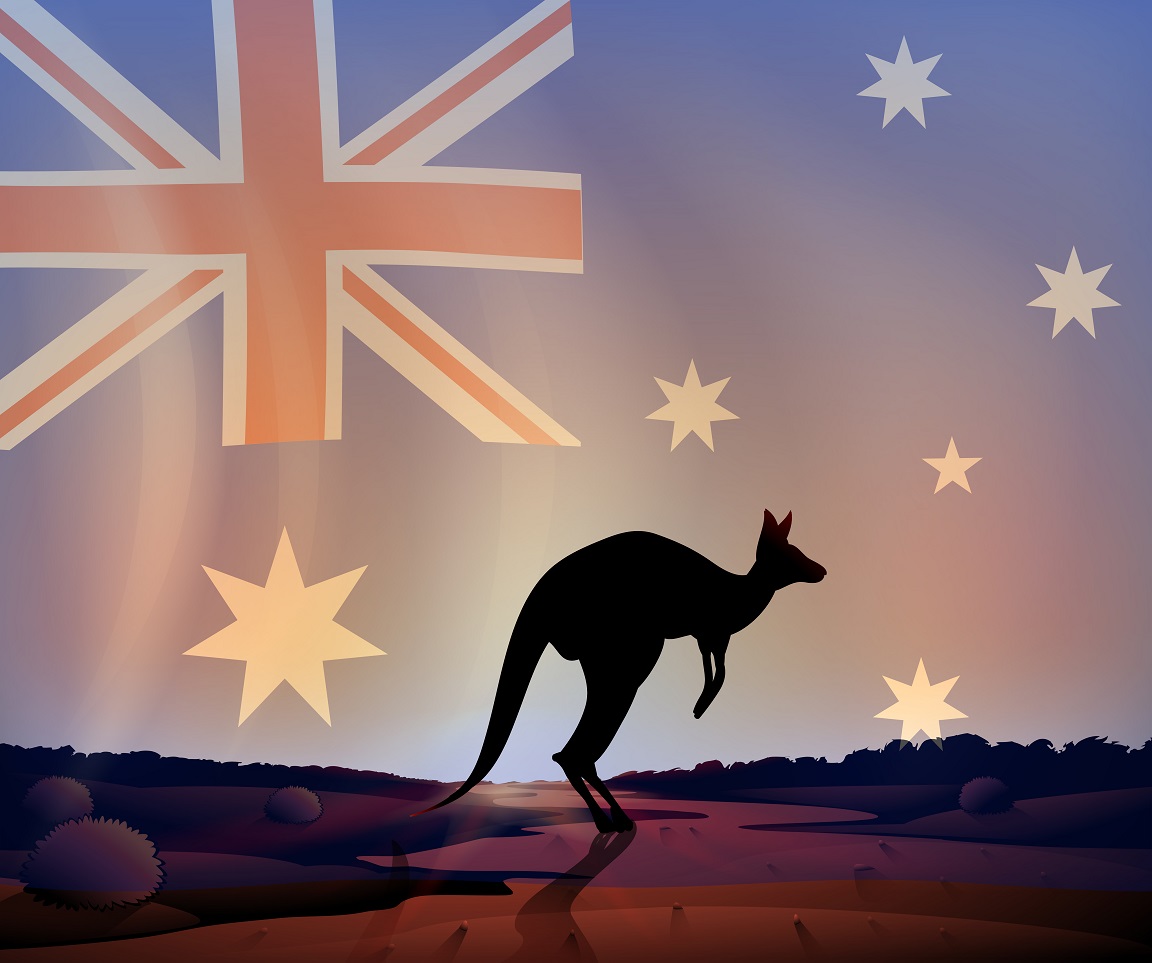 In this note, we provide a review of the Australian economy and banking system, highlighting the most important issues facing the sector. Australia is a wealthy country with an oligopoly banking sector, with banks known for their profitability, strong credit metrics, and high dividend yields. Current headwinds facing the economy, which will impact the banking system, include elevated real estate prices and a downturn in the commodities industry, although the banks’ direct exposure to the latter is limited.

Australia implemented major economic reforms in the 1980’s, including floating the country’s dollar, a series of tariff reductions across most industries, and a decline in corporate tax rates (in the later years of the decade)[1] The reforms and subsequent commodity/housing booms have supported strong economic growth over the past few decades, driving the country’s current GDP per capita to ~US$51,000 (ranked as the 11th highest in the world[2]).

The current central bank rate is 2.0%, which is the culmination of a long easing cycle that began in response to the 2007/2008 financial crisis and subsequent growth slowdown. The Reserve Bank of Australia (RBA, the country’s central bank) began lowering its benchmark rate from 7.25% (to 7.0%) in September 2008, and continued to cut until the rate reached 3% in April 2009. With the exception of a brief period of reversal in 2009 and 2010, the central bank has been in an easing mode for the past ~8 years. Aside from supporting domestic growth, the low rates have also aided Australian households’ abilities to service their debts, which are among the highest in the world when measured as a percent of disposable income[3]. The RBA has not gone so far as to enact quantitative easing, unlike many central banks globally (Federal Reserve, BoE, ECB, BoJ). 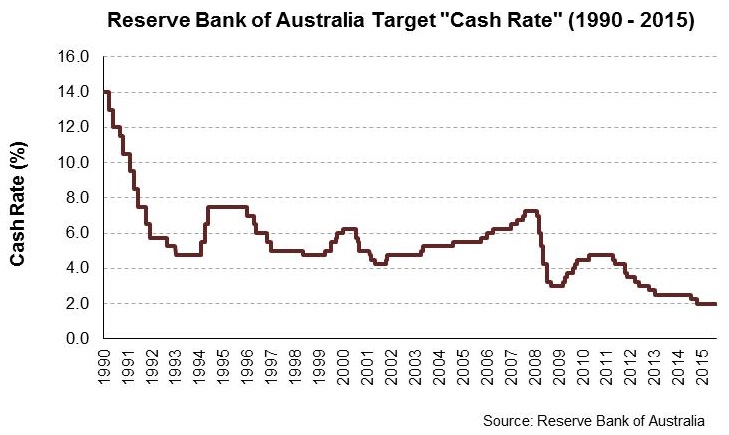 In addition, the fact its central bank is not operating at zero rates gives policy makers flexibility should the economy weaken – a clear advantage over other countries, where in some instances, rates on bank reserves are going / already negative.

Not unlike Canada, Australia’s economic performance is generally tied to its natural resources sector. The country’s major exports include coal, iron, copper, gold, and natural gas. The Australian dollar, similar to the Canadian dollar, has come under material pressure over the past two years, falling in unison with commodity prices. The dollar is currently at US$0.75, down from US$0.81 in May 2015 and US$1.05 in April 2014[4].

The economy’s export growth in recent years has been supported by its proximity to China, and that country’s demand for its output. China is the largest foreign consumer of Australian goods and services, accounting for nearly one-third of all Australia’s exports, and is a growing provider of foreign investment into the country[5]. Going forward, this relationship should be strengthened by the China Australia Free Trade Agreement, which came into force on December 20, 2015. Although a continued downturn in demand from China could put pressure on Australia’s GDP growth – currently forecast to be 2.6% in 2016 and 2.9% in 2017 – the country’s exports are still expected to increase by 7.4% and 6.8% in 2016 and 2017, respectively[6].

The banking sector in Australia is dominated by four financial institutions: National Australia Bank (NAB), Westpac Banking Group (WBC), Australia and New Zealand Banking Group (ANZ), and Commonwealth Bank of Australia (CBA), which combined account for ~80% of all domestic lending[7]. These four banks are very profitable, earning ~US$25 bln in total in FY2015, with an average ROE of ~15% over the same period[8]. This high level of profitability is supported by solid expense management, with cost-to-income (efficiency) ratios in the high 40’s and low 50’s; levels which have been relatively stable over the past five years. Strong earnings have also been driven by multiple years of excellent credit metrics. The average NPL ratio[9] is below 40bps, although there are concerns that falling real estate and commodity prices could lead to rising credit losses.

Australian banks are known for their return of capital emphasis. The banks currently have very high payout ratios, averaging ~75%, which translates into very high dividend yields, over 9% on average[10]. High dividend yields are not uncommon amongst the Big-4 banks, as they have averaged ~8% since 1992. In efforts to bolster their regulatory ratios in 2015, and maintain shareholder support from those that hold the stock for yield, the major banks raised significant amounts of capital instead of cutting their dividends[11]. The equity issuances have also supported the sector’s leverage ratios, with the banks now at ~5% (notably higher than the Canadian banks at ~4%).

Regulators and investors have singled out a few notable areas of potential headwinds for the Australian banks which, again not dissimilar to Canada, include exposure to real estate and commodities / mining. The former is of larger concern to regulators, as commodities account for just ~1.7% of loan exposure for the Big-4 banks[12]. It should be noted that a recent financial stability review completed by the Australian central bank stated that risks in other sectors “remain low”[13].

On average, the major Australian banks have ~50% of their loans tied to the Australian housing market[14]. In response to increased real estate prices[15] and the banks’ increased exposure, the Australian Prudential Regulation Authority (the “APRA”, the bank regulator) proposed measures in December 2014 in an effort to mitigate risks. These measures include, amongst others, limiting growth in the banks’ exposure to “investor” housing to a level not materially above 10% per year, and assessments on debt servicing that include an interest rate buffer of 2% above the stated loan rate. On July 1, 2016, the major banks will also be required to hold more capital against their residential mortgages, with the average risk weight increasing from 17% to 25%[16].

In response to regulatory pressure, some banks have also lowered the allowable interest-only period on certain mortgage products and lowered maximum loan-to-value ratios (“LTVs”). To compensate for the increase in capital requirements, the Big-4 banks recently raised prices on variable-rate housing loans by ~20 bps (e.g., ANZ increased 18 bps to 5.83%)[17]. Not surprisingly, the banks have disclosed that stressed housing loans have increased in areas of the country most impacted by the weaker commodity prices[18].

The most significant international market for the Australian banks is New Zealand. The Big-4 banks have large operations in their neighbour to the east (~13% of loans[19]), and have notable exposure to that country’s dairy market[20]. Milk prices are currently below the estimated industry average break-even point, leaving banks exposed to increased levels of default if prices do not recover[21]. In regards to real estate in New Zealand, which accounts for ~7% of loan exposure for the Australian banks[22], the Reserve Bank of New Zealand is pushing for lower LTVs on investment properties in Auckland, while also requiring banks to hold additional capital on those loans[23].

The APRA has designated four banks (NAB, WBC, ANZ, CBA) as domestic systemically important banks (D-SIBs), and requires these organizations to hold an additional 1% of risk-weighted assets (RWA) as a capital buffer. Banks are required to hold a capital conservation buffer of 2.5% of RWA and a countercyclical buffer, which for the latter ranges between 0% and 2.5%[24].