On October 15th, National Bank announced an $85 mln pre-tax restructuring charge (among other things). What is interesting is that this was the sixth such charge announced by the Canadian banks since Q4 2014.

As the chart highlights, restructuring charges for the Canadian banks have totaled almost $1 billion over the last year. Every bank, with the exception of Royal Bank, has reported one (with TD and CM each expected to report a second charge in Q4). 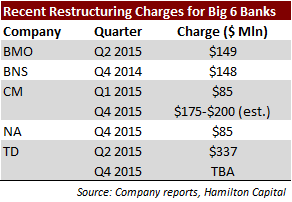 The Canadian banks are obviously very large, so even $1 bln in charges is not significant from a financial or capital perspective (in fact, all of these charges were absorbed by quarterly earnings, and therefore had no direct impact on capital). What is significant, however, is that it signals that the Canadian banks are concerned about future revenue growth and are adjusting their expense base downwards to compensate. And there are many good reasons for this caution.

First, the price of oil has declined by nearly 50% in the past year, weighing on an extremely important sector of the Canadian economy, as well as having negative spillover implications to other parts of the economy, including capital investment and construction, home prices, and the overall unemployment rate. Second, and directly related to the first point, Canadian GDP growth has been negative for two consecutive quarters (although Q3 is forecast to be positive).

Third, the May election of an NDP government in Alberta could weigh (further) on Canadian GDP growth if the province begins to implement fiscal policies which are not supportive of economic growth. This is especially significant given the already sub-par economic performance of Ontario.