In May 2011, we wrote an essay entitled “The Canadian Banks – The End of an Era”. In this essay – which was excerpted in the Globe and Mail – we explained why the Canadian banks were entering a period in which their two-decade period of double digit EPS/dividend growth was ending. Specifically, we identified three reasons supporting this thesis: (i) the drivers of the sector’s tremendous growth from 1989 to 2010 were fading/gone, (ii) with domestic consolidation nearly complete, capital deployment would shift decisively to foreign acquisitions, which have historically been more dilutive to EPS growth and ROE (than domestic targets), and (iii) that regulatory risk was likely growing, including higher mandated capital levels. Taken together, we concluded that the result would be more “normal” EPS growth of mid-single digits; good, but a large step-down from the 10%+ achieved by Canadian banks in previous two decades.

End of Era Thesis: Earnings Growth Would Decline to More “Normal” Annual Rates
Five Years Later: Earnings Growth Has Slowed (Despite a Credit Tailwind) to ~5.0%
Over time, EPS growth generally oscillates up and down with changes in credit quality, i.e., growth slows (rises) when provisions rise (fall). However, this has not been the case over the last 5 years. In fact, not only did EPS growth for the sector slow, it did so despite a credit tailwind (i.e., declining provision ratios). Year-over-year EPS growth declined in 13 of the 21 quarters (see chart). As a result of this downward trend, the cumulative average growth rate for EPS for the Big-Six banks over the past five years was ~5% – i.e., more “normal”. 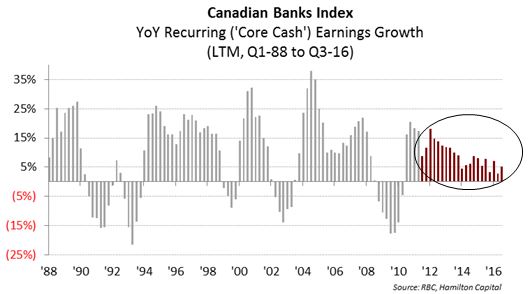 End of Era Thesis: Capital Deployment Would Shift Decisively to Foreign Expansion
Five Years Later: Foreign Expansion Expanded/Intensified (Significant Outlays by RBC and CIBC)
In the last five years, there is no question that the shift from domestic consolidation and towards foreign expansion has not only continued, but intensified. Since we wrote the essay, the Canadian banks made over 40 acquisitions, with approximately three of every four outside of Canada. However, even this statistic understates the importance of this trend. Two banks – Royal Bank and CIBC – arguably made high priority investments establishing U.S. platforms, which will likely become the main vehicles for future capital deployment.

With an eye towards buying quality, RBC bought California-based City National (CYN), a highly-regarded U.S. mid-cap bank with private banking operations. Given the scarcity value of its business mix and the quality of its platform, CYN was arguably one of the most attractive assets in all of U.S. mid-cap banking. Only 17 months later, CIBC announced its first foray into U.S. commercial banking by buying the well-regarded Private Bancorp (PVTB) in Chicago.

Coming off its transformational acquisition of Marshall and Ilsley, BMO acquired some smaller assets, as well as UK-based F&C Asset Management. BNS has made additional acquisitions in Latin America, including majority interests in both Banco Colpatria and Colfondos in Columbia. The bank also continued to acquire platforms/assets divested by some large global banks damaged during the financial crisis, including most recently Citigroup’s Peruvian platform. In the last five years, TD continued to build out its U.S. presence with the acquisition of Epoch Investment Partners. This is after the bank made significant outlays in U.S. commercial banking from 2007-2010, through its acquisitions of Banknorth/Commerce, the South Financial Group, a handful of small-cap Florida banks from the FDIC, and a number of loan portfolios.

There is no question that the size and quality of the Canadian banks’ platforms outside of Canada are significantly better now than they were a decade ago.

End of Era Thesis: Regulatory Risk Rising, Particularly Capital Requirements
Five Years Later: Capital Rules Compress ROEs ~350 bps (While Domestic Regulatory Risk Remains Low)
Although Canada arguably has the most investor-friendly bank regulator in global banking, regulatory risk did, in fact, rise over the last five years. As predicted, the source was not a result of any policy changes within Canada, but rather as a result of rising global capital requirements, including Basel III. The global trend towards higher levels of and higher quality capital definitely impacted the Canadian banks in the form of lower ROEs.

In recent cycles, declining/(rising) ROEs were driven by the rise/(fall) of loan losses. This was not the case in the last five years. As the chart below highlights, despite a material credit tailwind (i.e., declining provision ratios), returns on equity for the Big-Six Canadian banks compressed by a highly material 350 bps, driven by an increase in required common equity. That said, the Canadian bank ROEs are still some of the highest globally (along with Australia, Sweden, China, Chile, Colombia, select mid-cap U.S. banks). When we wrote our initial essay, tangible common equity – the highest quality capital – for the Canadian banks was ~$100 bln. Five years later, it is now ~$190 bln, and for this reason we see the material decline in ROEs as structural.

As we wrote in “On Capital, Canadian Banks Continue to Lose Ground vs. Global Peers” (July 15, 2016), it is possible the Canadian banks continue to experience regulatory-driven upward pressure on the sector’s key capital ratio (common equity tier 1), and continued downward pressure on ROEs. Therefore, in absence of a wholesale repricing of products across Canadian financial services, it is unlikely that the sector will see material increases in their returns.

New Era of “Normal” EPS Growth and Significant Emphasis on Foreign Expansion
As we explained in our “End of Era” essay from five years away, the Canadian banks were heading into a transition period, where the drivers of performance and valuations were changing, and some crucial tailwinds were fading. In the preceding two decades, the sector experienced double-digit earnings growth supported by a tremendous macro-economic tailwind, favourable regulation/fiscal policy including domestic consolidation and falling tax rates. In the next decade, we expect mid-single-digit EPS growth and the relative returns to be significantly influenced by the performance of the foreign platforms, especially U.S. commercial banking. As a result, it is becoming increasingly important for Canadian bank investors to gain a deeper understanding of the issues facing these platforms, and the drivers of their earnings.