Despite a macro driven correction holding back stock prices, Q3 2015 earnings season demonstrated that the recovery towards pre-cycle profitability continues. As the chart highlights, the European banks generated ~€130 bln in “core earnings” in 2007, i.e., before the cycle began (source: Keefe Bruyette and Woods, universe is ~70 banks, accounting for ~90% of system assets). During the sovereign debt crisis in 2011/2012, European bank earnings were ~€60 bln. However, since 2013, the sector has experienced a powerful recovery, as evidenced by the fact that earnings in 2015 are expected to be over €100 bln, having nearly doubled in the past 3 years. 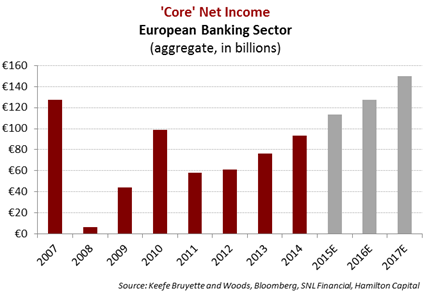 While a portion of the recovery relates to a depreciating euro versus the currencies of non-eurozone countries, the vast majority of the recovery has been driven by falling loan losses. Improving credit has been supported by improving GDP over the past few years, particularly in the largest countries. During August/September, the global financials and European bank indices declined by ~13% and ~17%, respectively, as the market was concerned about a global recession. However, this sell-off occurred despite the continued improvement in fundamentals (which is even more pronounced for the banks in the funds/mandates managed by Hamilton Capital). Year-to-date, the European bank index is up modestly, which compares favourably to the global financials and Canadian banks, both of which are down ~5%.