In this comment, we discuss the seemingly large gap between economists’ growth expectations for the global economy and those of the market. The former is forecasting comfortably positive growth, while the latter’s worries have prompted a global sell-off in equities. We also address the most likely trigger of a global downturn, while reviewing the impact of the European sovereign debt crisis. 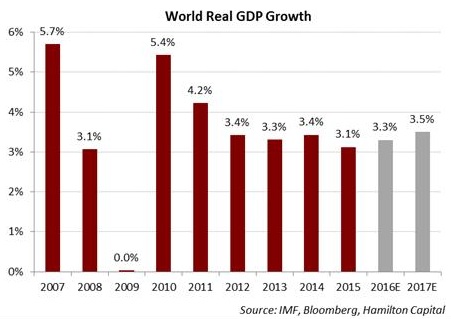 In fact, it is even worth noting that not only did the European sovereign debt crisis not cause a global recession, it did not cause a recession in half of Europe’s top 10 economies, including the U.K. and France[1] (using the short-cut definition of two consecutive quarters of negative GDP growth). To be clear, the so-called GIIPS countries experienced a very severe compression in their GDP, but these five countries account for less than 25% of total European GDP. In fact, while European GDP declined materially from 2011 to 2012 as the crisis grew, it rebounded in 2013.

[1] Other larger European countries that didn’t experience a technical recession are Switzerland, Sweden, Norway, and Poland.