As we have written in prior Insights, Wells Fargo (“WFC”) – like its other mega-cap peers – continues to struggle to generate earnings growth. The mega-caps also struggle with regulatory risk; before the recent U.S. election, we cautioned that the risk that regulators were shifting their focus from the capital markets banks to the largest regionals appeared to be rising. WFC was a prime example, coping with a scandal surrounding its cross-selling practices, which prompted our October note, “Is Wells Fargo Un-Investable (for Now)?” in which we explained our concerns about potential material – yet unquantifiable – regulatory risk.

After a Republican sweep in the U.S. elections, the bank may be the most significant beneficiary of the potential change in government generally, and the Attorney General more specifically. As a result, WFC was one of the most significant outperformers among the KBW Bank Index post-election, rising 13.6% in the first three days (and 16.0% through Friday).

However, the bank is not out of the woods, yet. On Friday, in a one paragraph press release, the OCC “… informed the bank today that it has revoked provisions of the enforcement documents that provided relief from specific requirements and limitations regarding rules, policies and procedures …”. This could be interpreted to mean that WFC is likely to face more strict regulatory oversight and/or additional fines, all of which makes assessing the bank’s future growth and capital more difficult. Given that WFC is now entering year #4 of basically zero EPS growth (see chart below), we believe WFC and its mega-cap peers continue to represent a challenging risk/reward (see our “U.S. Banks: C, JPM, BAC and WFC Continue Multi-Year Trend of Close to Zero EPS Growth”), notwithstanding the market’s interpretation of the election results. 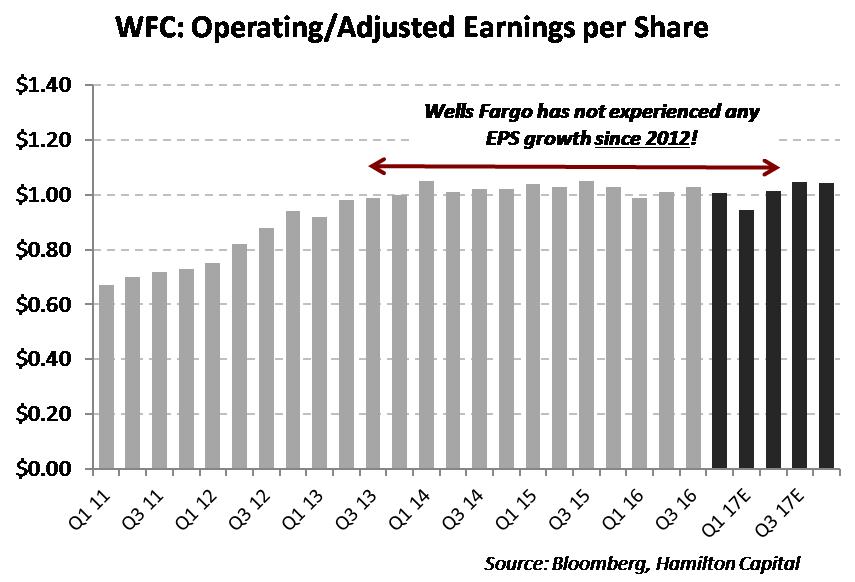