The U.S. banks reported a very solid, albeit messy, fourth quarter, completing the first year of what we expect to be a three year recovery. Of interest, this quarter saw the banks buck a very powerful historical trend in credit, as credit losses (or net charge-offs, NCOs) declined in Q4 versus Q3. This bodes very well for not only the durability of the credit recovery, but also for bank stock prices.

Many casual observers of the banks may not know that Q4 is generally viewed as a “clean-up” quarter, as management looks to write-off residual credits, sell challenged non-core loans (always for a loss), and  attempts to “clear the decks” for the upcoming year.

This trend is so well entrenched that – prior to this year – NCOs for the U.S. commercial banks (public and private) have risen in Q4 versus Q3 in 24 of the last 25 years – a highly significant trend. The sole exception was 2002, the last year of the Telecom-Media-Technology (i.e., “TMT”) credit cycle.

Therefore, Q4 2010 was just the second occurrence in 26 years (i.e., since   1985, the first year of quarterly data disclosed by the Federal Reserve). This would also appear to be a bullish indicator, since the last time this occurred the U.S. banks rose 30% in the following year (i.e., 2003). 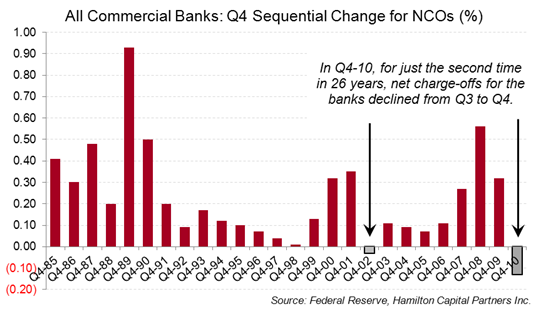