We generally have minimal exposure to the global mega-cap banks primarily because of their very low EPS growth, higher regulatory risk, and relative to their mid-cap peers, materially lower interest rate sensitivity. In this Insight, we explain why we believe “slow growth” WFC basically represents a Canadian bank counterfactual.

It is often asked, “why do the Canadian banks have foreign expansion strategies?” While there are arguably several reasons, we think an equally important question could be: “what if they didn’t?”

In our view, Wells Fargo (WFC) is basically a Canadian bank counterfactual – i.e., it answers the question what a Big-5 Canadian bank might look like if it did not have a foreign platform/viable expansion strategy. In our view, WFC is arguably the first bank in U.S. history to be strategically challenged based on its immense size. To illustrate, with the integration of Wachovia complete, credit normalized, and GDP growth for the United States well below historical trends, WFC is now entering its fourth year of basically zero earnings growth. And with rising legal/litigation/compliance expenses likely to weigh on future earnings, it would not surprise us if 2017 consensus estimates are revised downwards. 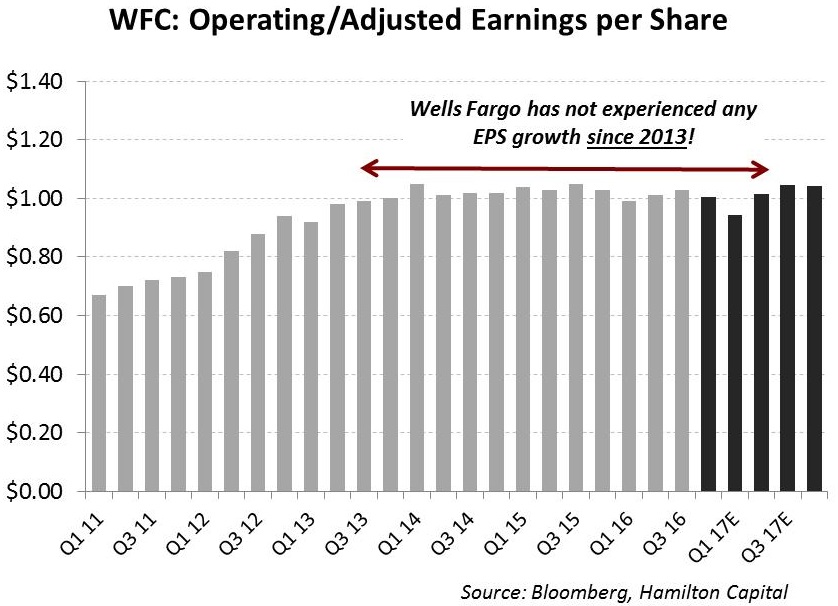 Although we believe the potentially significant regulatory risk is sufficient reason not to own WFC (see our October 7th Insight: “Is Wells Fargo Un-investable (for Now)?”), another important reason is that we believe its growth challenges will make it more difficult for the stock to outperform its mid-cap peers.

First, with a ~US$2 trillion dollar balance sheet, WFC is constrained by the “law of large numbers”, i.e., the bank is so large it is extraordinarily difficult for management to take any action that would have a material impact on profitability. Second, the U.S. market is sufficiently consolidated, meaning the bank is too large to profitably take market share in its core banking businesses. Third, WFC is prohibited by statute from expanding its deposit market share through acquisitions, as it is above the statutory 10% cap (i.e., it can only increase its share through organic growth).

The result? WFC’s gigantic size means it is almost entirely dependent on GDP growth and monetary policy (e.g., a rising Fed Funds rate) for revenue growth. The domestic operations of the Canadian banks largely suffer from the same constraints. However, unlike WFC, the Big-6 Canadian banks all have viable expansion strategies (i.e., vessels for capital deployment), which if well-executed provide an opportunity to generate returns greater than the cost of capital. This means their revenue growth is not as constrained by domestic GDP growth and/or the actions of central bankers (although it is heavily influenced by these factors). In our view, this is why Wells Fargo represents the Canadian bank counterfactual – i.e., what a Canadian bank would look like without a viable expansion strategy.

We would make two other points on WFC. First, it is arguable that the bank’s alleged cross-selling transgressions are directly related to its obvious growth challenges. Second, and of perhaps greater interest, WFC’s overwhelming focus on personal and commercial and mortgage banking leaves it uniquely strategically challenged relative to its mega-cap peers. Unlike JPM and BAC, which are also above their deposit caps, WFC lacks a sizeable capital market business (C’s deposit market share is well below 10%).

While EPS growth of the Canadian banks is clearly slowing to mid-single digits, we would expect the sector to outgrow the U.S. mega-caps in absence of material differences in either GDP growth rates and/or central bank policy as those giant banks suffer continue to restructure their business model with the medium-term goal of increasing their ROEs from the mid-single digits to over 10%.

That said, within the North American banking sector more broadly, we continue to favour a portfolio drawn from the nearly 200 U.S. mid-cap banks, which are growing EPS faster than their larger peers, are more rate sensitive, have lower regulatory risk, and are consolidating.