Negative loan growth is a very important issue since many believe only when the “banks start lending again” will the U.S. economy recover.

Each week, the Federal Reserve releases its H.8 report detailing the assets and liabilities for the U.S. commercial banks. Although the weekly change in total loans may swing positive or negative, this report (excluding the impact of an accounting change in March 2010) has shown a clear negative trend in loan growth since 2008. During the recent downturn, various critics of the sector used this data to draw conclusions ranging from the extreme (“the banking system is broken”), to the misleading (“the banks are not lending”).

In fact, as the charts below highlight, the U.S. banks have experienced negative loan growth during every single noteworthy credit cycle (both regional and national) since the Great Depression.

At the same time, banks begin to remediate (i.e., tighten) their underwriting standards, as they seek to forestall additional impairments and preserve capital, thereby reducing the pool of credit-worthy borrowers. Together, these factors are large enough to offset new originations in the early stages of a credit cycle.

Eventually, banks work through their legacy portfolios, either through write-downs or pay-downs. This, combined with improvements in the economy, allows positive loan growth to resume from a lower base. It is no exaggeration to say that this happens every time, and it is evidence only of the fact that the banks are in a credit cycle. It is by no means evidence of a broken financial system. 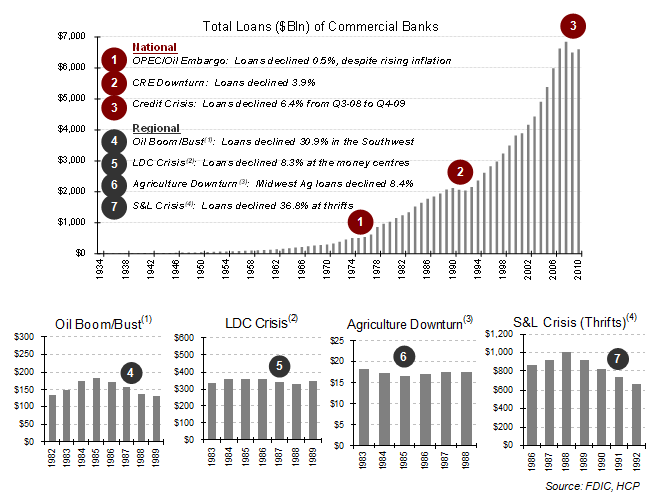