To highlight the challenges the global investment banks are facing, we would note that there is a negative headline regarding these issues almost every day. Below is a sample of headlines from just the past few months:

Everywhere you look, there is evidence that the global investment banking model is under siege.

How did it come to this?

Before the financial crisis, investors measured/assessed capital levels of the global investment banks primarily using their Tier 1 capital ratio (under the Basel regime), with “high” ratios seen as indicative of financial and capital strength (while at the same time, very little attention was given to absolute balance sheet leverage, i.e., assets-to-equity). However, the financial crisis ultimately exposed using only Tier 1 ratios as a measure of capital strength, to the exclusion of absolute leverage, to be a flawed approach, as many global investment banks were able to operate at “high” Basel Tier 1 ratios despite having significant financial leverage. In many instances, these giant firms were able to operate with ratios of assets-to-equity of up to ~50x, because large amounts of their (ultimately troubled) assets were rated “AAA”, and therefore, had low risk-weightings.

When disruption in the fixed income markets emerged in 2008, financial risk from very high leverage/assets-to-equity was exacerbated by the unstable funding models in the independent investment banks, namely high reliance on overnight REPO borrowing (which reduced funding costs, contributing to higher net interest income). This universe of companies included some of the largest investment banks in the world, many with balance sheet sizes in excess of US$1 trillion (i.e., Goldman Sachs, Morgan Stanley, Merrill Lynch, Bear Stearns, and Lehman Brothers). The financial distress that emerged in these huge financial intermediaries served as a source of contagion and a key accelerant to the escalating global credit/financial crisis in 2008/2009.

As a result, the aftermath of the crisis has seen increased regulation targeted at investment banks, as global regulators sought to reduce the probability of a future crisis. Below, we highlight the main policy changes, and identify how they are weighing on current investment bank profitability, specifically, and the business model, generally.

First, regulators sought to strengthen and improve the funding model of the independent investment banks by requiring stricter liquidity ratios, greater use of term funding and lower reliance on overnight funding (the banks also had to significantly increase and extend their sources liquidity). This has resulted in more, and longer duration funding, which has reduced net interest margins and net interest income, a key revenue source.

Second, regulators sought to significantly reduce the system’s financial leverage (i.e., assets-to-equity). For the investment banks, this was accomplished in the following ways: (i) raising common equity, (ii) introducing a stricter measurement of risk-weighted assets (including the use of internal models), and (iii) simplifying their business model/exposure to illiquid “Level III” assets (many of which are less relevant to the core financial intermediation between providers and users of capital).

The reduced ROE is evident in certain product lines including bespoke/OTC on-balance sheet derivatives and non-agency mortgage-backed securities (MBS), areas which were formerly large drivers of investment bank profits but are now increasingly challenged businesses due to higher required capital requirements. These capital cushions were made even larger for systemically important financial institutions (SIFIs) and global systemically important financial institutions (G-SIFIs). This had the desired effect of significantly increasing required capital levels, and cutting returns on equity by more than half (see chart below). 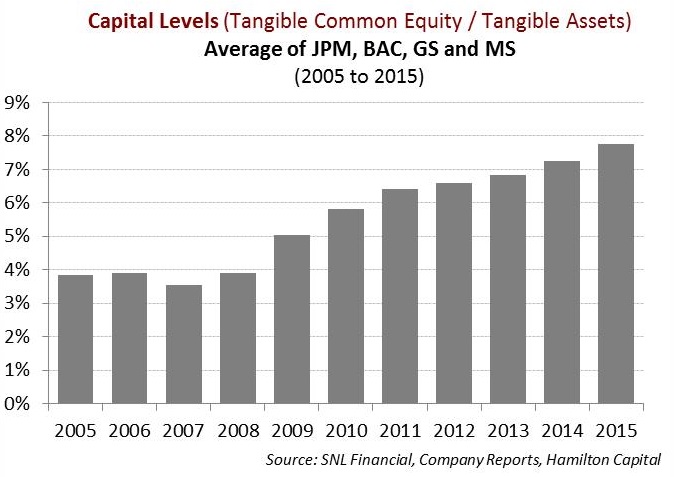 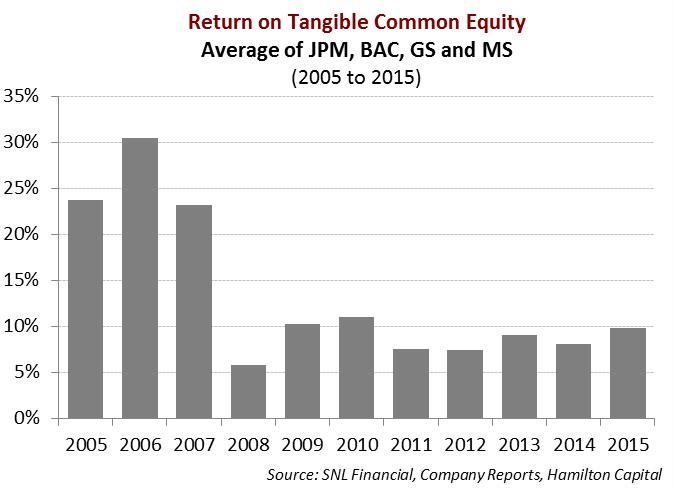 Third, regulators sought through the “Volcker Rule” to eliminate any potential intermingling between FDIC government guaranteed retail deposits and institutional speculative, i.e., “proprietary”, trading. This resulted in universal banks that possessed insured retail deposits to be subjected to significant regulatory scrutiny, particularly with respect to market making. Given that the exact point between when legitimate market-making becomes “speculative” trading is not at all clear, this regulatory uncertainty had the effect of reducing market liquidity from the large fixed income trading firms, which has depressed trading revenues, one of the most important revenue sources for global investment banks.

And fourth, regulators sought to “change the culture” of global banking and punish those that they considered “bad actors”. This led to the introduction of significant regulatory imposed fines for a number of activities, including: LIBOR fixing, FX manipulation, and residential MBS (RMBS) misrepresentations. The resultant fines have been in the tens of billions of dollars, further weighing on capital ratios and ultimately ROE.

Summary: A Sector Struggling to Raise Returns on Capital

Together, these changes have resulted in large declines in return on equity for the investment banks, necessitating attempts to restructure their business models to generate returns higher than their cost of capital (in the low to mid-teens as a percentage of equity). The current weak market environment is adding to these challenges by weighing on stock prices and investor sentiment. Unfortunately, we see the global independent investment banks continuing to experience significant challenges, and given their sheer size, continuing to negatively impact investor sentiment.

In the years immediately following the credit crisis, the sector has attempted to increase ROEs through the following: (i) reduce compensation cash ratios, (ii) deferring compensation by adding more stock-based compensation, and (iii) reducing exposures to high capital density assets. It also appeared as if management teams believed that revenues/volumes would ultimately rebound, or normalize at materially higher levels, which combined with steps taken would take ROEs into the mid-teens.

This of course, has not happened as revenues never rebounded, keeping ROEs stubbornly close to, or even below the cost of capital. As a result, the sector is now moving to the point where it will need to restructure its business model to operate in a lower revenues environment. This will ultimately result in the repricing of multiple products and put further pressure on expenses, especially compensation.

In our view, the restructuring of the business model will take years.

In the meantime, we expect these low returns to persist, which will weigh on share price performance, potentially limiting share prices to growth in book values. That being said, although the global investment banks dominate headlines and represent a large weighting in the global financial sector universe, at ~15% of the S&P Global 1200 Financial Sector Index, they are but a relatively small number of companies.

This Insight should be read in conjunction with our Notes from NYC: For Global Investment Banks, Legacy Issues and Volatile Markets Creating Challenges (23/03/16), in which we discuss the findings from our meetings with 7 banks, including 6 international banks.