With a 20% rise in loan losses in fiscal Q1, it would appear that Canadian banks are entering at least a mild credit cycle. In our view, the magnitude of provisions for credit losses taken over the next several quarters will be influenced by three issues: (i) an over 50% decline in the price in oil is placing stress on more than $100 bln in drawn/undrawn oil and gas exposure, (ii) Alberta, which represents 20% of the Canadian economy, is in year two of a recession, placing pressure on consumer loans, and (iii) the sector’s very low (and low quality) reserves. In this Insight, we discuss the implications of these three important issues, as we attempt to answer for Canadian bank investors, “how worried should you be?”

“Allowances” and “Reserves” are used interchangeably in this note. The former is the dominant term for Canadian banks, while the latter is more commonly used for U.S. banks. In addition, collective allowances for loans not identified as impaired are referred to as “general allowances” or “collective general” in this note.

Credit Cycle Appears to Be Emerging; How Worried Should You Be?

Although provision ratios remain below longer-term averages, the almost 20% rise last quarter has increased concerns that the Canadian banks are entering at least a mild credit cycle. As a result, we think there are three issues in particular on the minds of Canadian bank investors: (i) deteriorating credit quality in the Canadian banks’ over $100 bln of committed oil and gas exposure (drawn and undrawn), (ii) the recession in Alberta and the potential for additional consumer related credit losses, and (iii) low – and low quality – reserves (i.e., amounts set aside against future credit losses).

The price of oil has fallen over 50% in the past two years, causing credit stress in the large direct/indirect oil and gas portfolios of the Canadian banks. As of the most recent quarter, the Big-6 had committed exposure of ~$107 bln, split between $50 bln drawn and $57 bln undrawn (see chart below). Drawn exposures, which are on balance sheet, represent a noteworthy 2.1% of gross loans, or over 25% of tangible common equity for the group.

Concerns over growing credit losses are valid, as gross impaired loans (“GILs”), i.e., “bad loans”, are rising rapidly within energy portfolios, placing upward pressure on provisions. The level of gross impaired loans has risen from close to zero to just over 2% of drawn commitments in the past several quarters.

Of great significance, the U.S. banks have been recording material increases in their reserves for their oil and gas loan portfolios. This trend has continued with multiple pre-announcements and Q1 results this month. Just last week, WFC – considered one of the best banks in the U.S. – built its oil and gas reserves to 9% of drawn loans. Notwithstanding the fact that WFC’s portfolio is dominated by non-investment grade exposures[3], this is an important data point for Canadian investors, as U.S. banks have greater flexibility than their Canadian counterparts in building reserves in advance of loans going “bad” (i.e., becoming impaired).

Alberta, which represents 20% of the Canadian economy, entered a recession last year following the collapse in the price of oil and is forecast to remain in recession in 2016. The economic downturn of Canada’s usually fastest growing province is a notable issue for the Canadian banks as they have significant exposure to Alberta in the form of ~$102 bln uninsured retail loans (see chart)[4].

On the bright side, $74 bln of that total is comprised of uninsured residential mortgages/HELOCs, which generally have very low loan-to-value ratios (i.e., the portfolio is heavily collateralized), reducing the potential for large credit losses. However, the other $28 bln, or over 1% of total loans, is in uninsured non-residential consumer loans. It is this category of loans that holds the highest potential for losses, since it is more sensitive to rising unemployment, which has risen sharply over the past two years in Alberta. 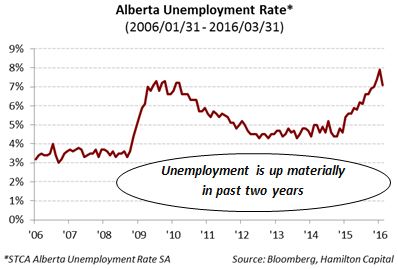 Issue #3 – Low (and Low Quality) Reserves a Concern for Investors (International, in Particular)

As we discussed in Part #1 of this series, Are Sectoral Allowances the Solution to Low Reserve Ratios?, Canadian banks have very low reserves, i.e., allowances for credit losses[5]. The most important ratio bank investors use to assess reserve strength is the reserves-to-loans ratio (“reserve ratio”)[6]. In times of relative stability, many investors also use the coverage ratio[7], but the utility of this metric declines markedly in periods of rapid changes in credit quality (either positive or negative).

Given reserves represent a key cushion to earnings and capital in periods of deteriorating credit quality, the large difference between the reserve ratios of the Canadian banks and those of their global peers is becoming an increasingly important issue (particularly for international investors), as evident on the most recent quarterly conference calls.

As we explained in Part #1, the Canadian banks’ reserve ratio of 62 bps is materially lower than the sector’s 15 year average (~100 bps), U.S. banks (~140 bps), and the global banks (~270 bps average by country), the latter of which have, on balance, much worse asset quality. The Canadian banks’ low reserve ratios are of particular concern for U.S. investors, who assign significant weight to this metric in assessing balance sheet strength. This is in contrast to Canadian investors who rely more heavily on qualitative factors, like historical performance, stable/secure yields, and overall franchise quality.

Adding to the reserve concerns is the fact that reserve quality is arguably very low. The quality is compromised by the fact that ~60% of Canadian bank reserves are general allowances[8], which are – for the most part – not allowed by the regulator to be drawn down against large scale impairments, making them de facto “unusable” from the perspective of equity investors.

With provisions up 20% last quarter, it would appear the Canadian banks are entering at least a mild credit cycle, driven by further credit deterioration in the oil and gas and Alberta-based uninsured consumer loan portfolios. This is likely to lead to higher credit losses over the next several quarters.

Importantly, very low reserves-to-loans ratios mean future realized credit losses will largely have to go through the income statement, increasing the risk of further earnings downgrades. History shows that sell-side analysts tend to bring their estimates down coincident with, rather than ahead of, rising loan losses. Year-to-date, estimates have only declined a modest ~2%; this would imply that the sell-side is not assuming a material increase in provisions, particularly given that some of this reduction likely relates to lower forecasts for fixed income trading (a sizeable source of revenues).

Downward revisions and slower EPS growth have the potential to weigh on both share price and dividend growth. Fortunately, the financial strength for the sector remains very strong and would remain high even in the most plausible worst case scenario. The primary reason is that quarterly profitability of the Canadian banks is still high; last quarter’s pre-tax earnings net of dividends were ~$6.5 bln.

[1] In our definition of “uninsured retail loans”, we include uninsured non-residential/consumer retail loans and uninsured mortgage/home equity lines of credit (HELOC).
[2] Excluding TD’s 2002 sectoral allowance.
[3] Just 7% of WFC’s energy portfolio is investment grade.
[4] Alberta non-residential retail exposure approximated for certain banks. For example, National Bank’s Alberta uninsured non-residential retail is estimated at 80% of “Oil Regions” (which includes Alberta, Saskatchewan, and Newfoundland), based on their uninsured residential loan mix in those regions.
[5] Canadian bank reserves under IFRS consist of two main components: (i) individual allowances, for impaired loans that are individually significant ($2.3 bln), and (ii) collective allowances ($12.4 bln). The latter is divided into two sub-components; amounts for impaired loans that are too small to be individually identified of $3.5 bln (e.g., residential mortgages, credit cards) and general allowances of $8.9 bln (amounts for loans not identified as impaired).
[6] Reserves divided by gross loans and acceptances. This ratio is often expressed in basis points.
[7] Allowances for credit losses (or reserves) divided by gross impaired loans.
[8] Also known as the collective allowance for loans not identified as impaired, under IFRS.