A number of important themes are emerging in the financial services sector, which in North America alone includes over 1,000 companies, and over $4.5 trillion of market capitalization. Macro risks remain, but we believe that over the next 24 months, several themes offer excellent investing opportunities. Here is a description of just three…

Theme #1 – Rising Interest Rates: The impact of normalizing (i.e., rising) interest rates varies within the financial services sector. In some sub-sectors, the impact to earnings (and hence, share prices) can be substantial. In others, the impact is much more muted. The same is true by country. For example, as we wrote in August 2013, “Why We’re Not Short (or Long) the Canadian Banks”, Canadian banks have comparatively low sensitivity to higher rates owing to their sophisticated asset-liability management and lower percentage of margin sensitive net interest income. By contrast, in the (generally) more mono-line U.S. market, some financials, especially mid and small-caps, could see a significant impact, be it from margin expansion, lower actuarial reserves, declining reinvestment risk, volume changes, or reductions in fee waivers, to name just a few examples.

With the Federal Reserve eventually tapering, and real rates still negative almost across the board, many companies are poised to benefit as rates normalize over the medium term. Although it is not clear how much or how fast, it is clear the direction for rates over the next few years is up.

Theme #2 – U.S. Bank Consolidation: Market forces would have caused the U.S. banks to begin to consolidate a few years ago; however, the regulators’ near maniacal focus on capital levels prevented this theme from emerging earlier. Today, with capital levels now very robust, and bank share prices having recovered significantly, it is our view that this trend is taking hold after a couple of false starts, particularly within the mid-cap bank space.

In fact, the chart below implies that deal values are rising. As we wrote in our December 13, 2012 letter, “100 Bank Mergers”, we expect consolidation among the mid and small-cap U.S. banks to represent a significant investing opportunity in the financial services sector. 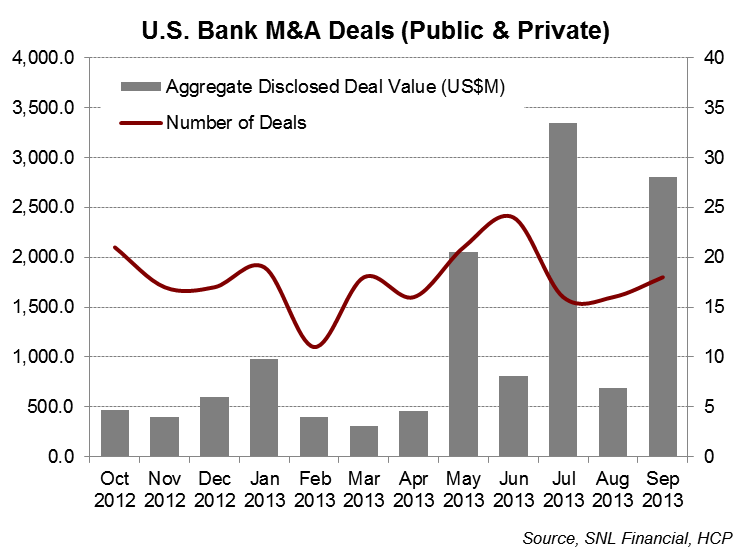 Theme #3 – European Bank Recovery: Over the past three years, the continent has experienced several crisis-like episodes, each of which threatened to evolve into a full-blown crisis. This started with Greece and spread to a number of other EU countries in 2009-2010. In 2011, the market became concerned with macro risk, and the potential for a full-blown banking crisis originating in Spain.

Since then, the situation in Europe has largely stabilized, and in our view, the risk of a sovereign default for certain countries has declined materially (but has not been eliminated). Moreover, with substantially improved bank leverage ratios (i.e., lower), the risk of forced large-scale recapitalizations or worse, nationalization, has – again for certain countries – also declined materially. In this relatively lower risk environment, bank valuations are still highly discounted.

These are just three of many themes that we believe will provide investing opportunities in the global financial services sector over the coming quarters and years, each of which is a significant focus of our firm.