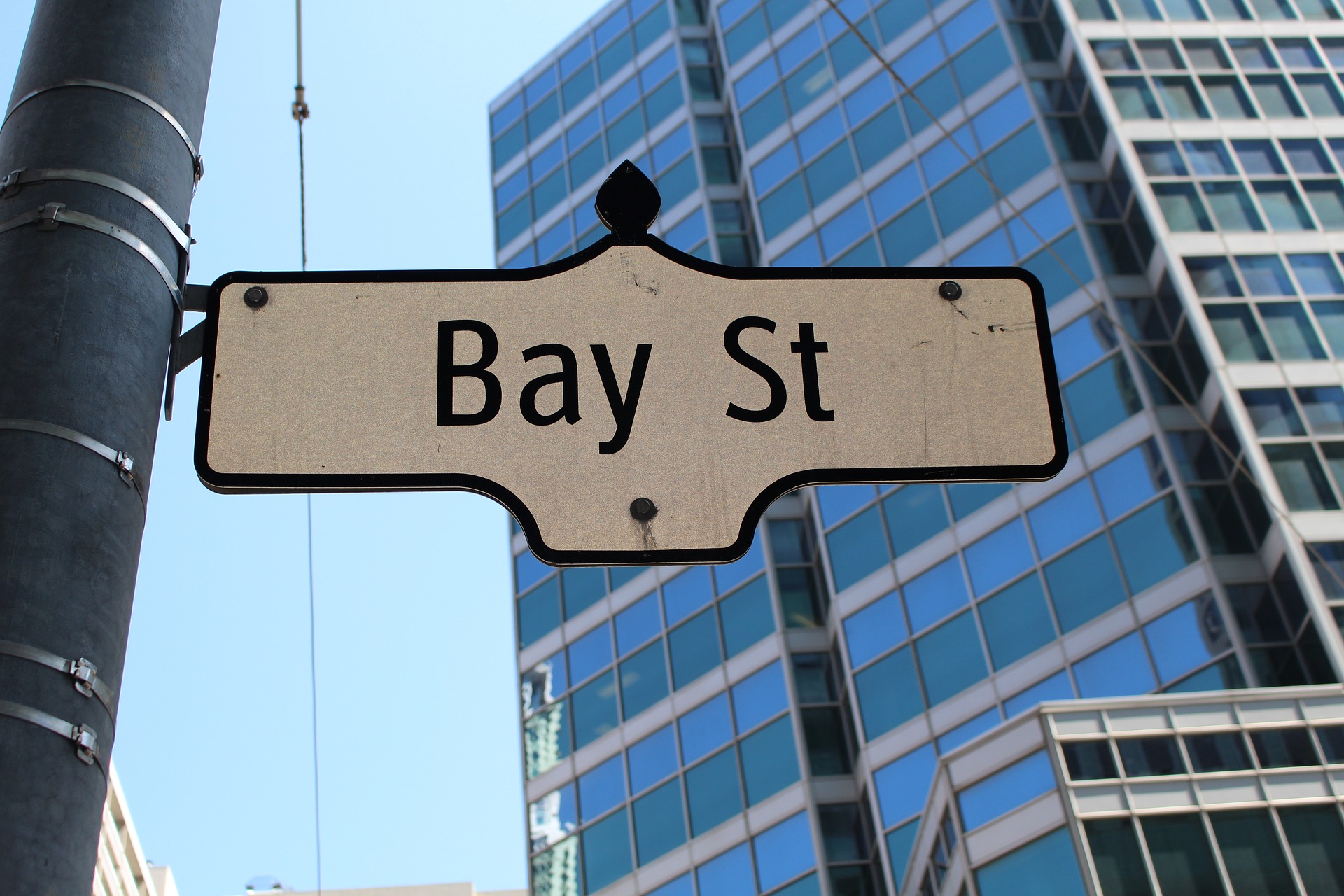 The Canadian banks had a very tough 2022 falling 8.9% – just the 5th decline in the last 20 years, which includes financial crisis years of 2007 and 2008[1] (the sector even rose 3.8% in 2020, despite COVID). The main reason for the decline last year was falling price-to-earnings multiples caused by the market’s concern that global central banks could cause a recession by aggressively raising interest rates to tame resurgent inflationary pressures. Further adding uncertainty was that central bankers globally were/are simultaneously engaging in quantitative tightening, the effect of which cannot be easily assessed.

Interestingly, like most of the market, the large negative performance of the Canadian banks last year came principally from falling price-to-earnings multiples, as stock prices declined while forward 2024 analyst estimates remained surprisingly firm (despite some variability within banks)[2]. In fact, the current market could be described as “analysts versus the markets”. In 2023, Canadian bank investors will find out which view prevails.

*** NOW TRADING *** Before we talk about the Canadian banks, we wanted to announce the launch of the Hamilton Canadian Financials Yield Maximizer ETF, or HMAX. This covered call ETF will be ~85% Canadian banks and Brookfield and has an initial target yield of 13%+, paid monthly. This materially higher yield will be supported by a coverage ratio of ~50% (higher than most other covered call ETFs) and writing options at-the-money (versus out-of-the money). That said, under current parameters, investors would still realize roughly half of the upside from potential capital appreciation. HMAX is designed for investors who are seeking higher monthly income from a portfolio of primarily Canadian banks.
For investors seeking higher growth potential and an attractive yield, we offer the Hamilton Enhanced Canadian Bank ETF (HCAL) which is the top performing Canadian bank ETF since inception, with an annualized return of 22.1%[3]. We further offer the Hamilton Enhanced Canadian Financials ETF (HFIN), which is an equal weighted portfolio of Canadian financials. HCAL and HFIN have current annualized yields of 7.1% and 6.5%, respectively3.

Now, back to the Canadian banks.

Going into Q4, we wrote “Three Things to Watch in Q4”, where we noted the banks traded at deeply discounted valuations (~9.1x forward), which implied 15%+ reductions in analyst estimates. Given their importance on earnings and valuations, we highlighted three trends to watch for: (i) provisions against impaired loans (to track “real” credit trends), (ii) net interest margins and anticipated expansion, and (iii) potential builds in performing allowances (which, while only accounting, could signal management’s future expectations). In our view, these three items would have the largest impact on analyst estimates, including possible downward revisions. We concluded it would take a LOT of bad news to validate the discounted valuations.

As it happened, nothing was resolved insofar as analyst forward 2024 estimates barely moved, falling less than 1%[4]. Nor did the market back away from its bearish expectations, with banks still trading at 9.1x forward. Heading into 2023, for Canadian bank investors, we believe there are opportunities and risks.

Notwithstanding the negative sentiment and discounted valuations, the fundamentals of the sector remain surprisingly resilient, primarily because unemployment remains low. In 2023, we believe the following represent opportunities for Canadian bank investors. First, the potential for multiple expansion, should the economy achieve a soft landing and/or avoid a recession. Any positive economic news including/especially related to slowing inflation could result in multiple expansion as the market assigns a lower probability of a recession.

Second, upward earnings revisions, should the banks report credit losses lower than analysts’ estimates. As the chart below highlights, the analysts already appear conservative, forecasting credit losses to more than double to $11.6 bln from $4.4 bln last year[5] ($5.2 bln on impaired loans). They are forecasting a further 20%+ increase into 2024 to $14.2 bln. 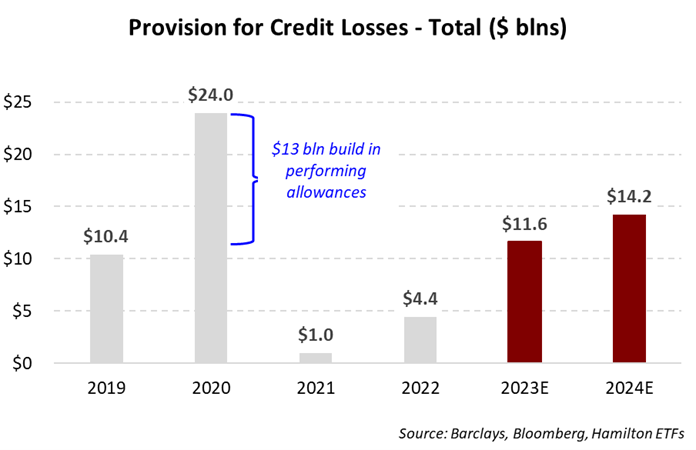 However, if unemployment remains low and/or the economy avoids a recession, it is possible that actual credit losses are lower than forecast, and consensus earnings estimates are revised higher.

Fourth, capital markets revenues have been quite weak in the last two quarters. Last quarter was the second consecutive quarter with revenues below $6.0 bln, which is well below recent levels (~$7.0 bln), or even recent highs of $8 bln. As 2024 progresses, an increase or normalization in market activity has the potential to add substantially to revenue growth.

While the fundamentals remain resilient, and bode well for the sector, there are some potential obstacles/risks. First, the Bank of Canada could hike rates faster/higher and trigger a deeper slowdown than might be required to tame inflation. This would result in higher loan losses and/or weaker revenue growth. As mentioned above, provisions would have to rise above analyst forecasts of ~$12 bln – a very large amount.

Second, and related to recession risk, is the potential decline in earnings from a larger than expected increase in performing allowances. Even though this ‘expense” is only accounting, any large builds could unsettle the market. Since COVID, this accounting reserve has been – BY FAR – the largest creator of earnings volatility. Given the “newness” of this accounting, it is difficult to predict future trends.

Third, regulatory risk appears to be rising. For example, OSFI surprised the market with an increase in the stability buffer which triggered an immediate equity raise from BMO. The regulator has further announced a review of the mortgage rules, which could cause further stress on housing. And of course, this comes after the Federal government targeted the sector for special bank taxes.

Fourth, falling home prices might weigh on consumer confidence/spending and perhaps other economic activity (like housing starts). This could translate into slower GDP growth, which would weigh on overall revenue growth for the Canadian banks. However, we don’t anticipate any material mortgage credit losses given: (i) CMHC mortgage insurance is required for borrowers with lower collateral and (ii) low loan-to-value ratios on uninsured mortgages.

On Balance, Sector Remains Very Cheap, Pricing in a LOT of Bad News

Heading into 2023, we believe the market is pricing in a hard landing including at least a 10%-15% decline in earnings estimates. While possible, we do not see this as the highest probability outcome. As the year progresses, the market will be able to better assess these risks. In the meantime, fundamentals remain resilient, and dividend yields are high at over 4.5%. In our view, valuations already reflect a LOT of bad news.

Investors seeking exposure to Canadian banks should consider the Hamilton Enhanced Canadian Bank ETF (HCAL) – which is the top performing Canadian Bank ETF (since inception)[6]. With a yield of 7.1%, paid monthly, HCAL offers higher income, and growth potential in the event of a recovery.