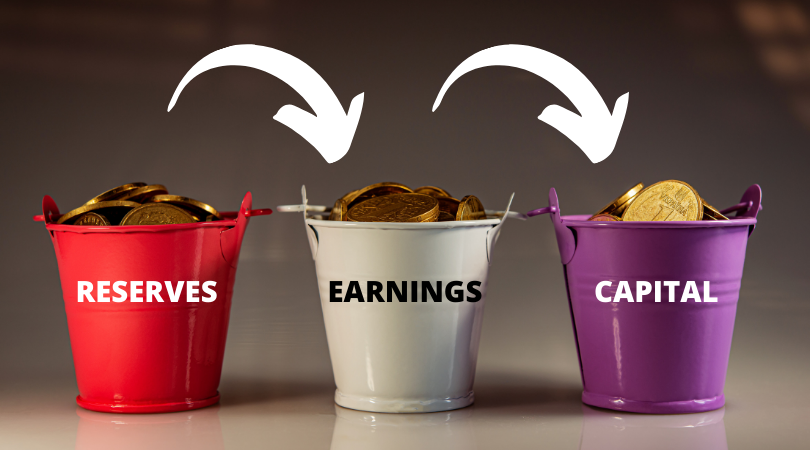 In this Insight, we explain why we believe reserve releases of between $6 and $8 bln for the Canadian banks are coming in 2021, which could have a material impact on share prices. While all credit cycles are unique, they each have distinct stages and this COVID credit cycle has been no different. The first stage was three quarters in duration (Q2-20 to Q4-20) and characterized by rising loan losses (reserve builds), depressed earnings, downward pressure on capital and economic uncertainty. (Note to reader: this Insight uses the terms ‘reserves’ and ‘allowance for credit losses’ interchangeably).

The banks entered the recovery stage of the credit cycle last quarter, as we predicted in our October 2020 webcast, “Canadian Banks: Credit Cycle is (Basically) Over”[1]. In fact, to capitalize on this anticipated recovery, we launched our modestly levered Hamilton Enhanced Canadian Bank ETF (HCAL[2]), to offer investors the potential for higher longer-term returns and a higher yield (paid monthly), especially versus covered call strategies, which historically have experienced their largest underperformance in rising markets.

We believe the recovery stage will see three catalysts for bank shares in 2021 (see our February video, “Canadian Banks – Three Potential Catalysts for 2021” for more detail):

Catalyst #1 was realized in Q1 and supported a post-earnings rally[3]. In the coming quarters, we believe reserve releases will be the next catalyst for bank stocks, both directly and indirectly.

How Reserve Releases Could Support Canadian Bank Stocks in 2021

Reserve releases have the potential to materially impact bank shares and will be the most visible confirmation of the recovery. In periods of economic uncertainty, the banks set aside additional reserves based on their estimates of future credit losses, reducing earnings and capital. However, the banks have a history of being very conservative and setting aside more than what they ultimately need.

We believe the banks were similarly conservative this cycle. Aided by substantial fiscal support and loan deferrals, the banks, we believe, have set aside a level of reserves that will materially exceed what is ultimately needed to absorb actual losses. Therefore, as the economy reopens, we expect the banks to release these “excess” reserves back through earnings and into capital.

First, the banks are likely entering a period of unusually low loan losses, which could even include quarters of negative provisions (i.e., writebacks). Although difficult to forecast, we believe the total releases will be between $6 to $8 bln (more on this later). We do not expect the market to “pay” for all of these earnings. However, a combination of reserve releases and strong GDP quarters are likely to put downward pressure on forecast provision ratios and upward pressure on forward earnings estimates, which would be positive for bank stocks.

Second, reserve releases will put significant upward pressure on the most important capital ratio (CET1), which has increased in the last three quarters from a pre-pandemic average of 11.6% to 12.5% as of the most recent quarter. In absence of any capital action, this key ratio is headed to over 13% in the short-term, a very high level by Canadian standards. This substantial level of capital will support capital deployment for some banks (i.e., acquisitions, internal reinvestment), and capital return for others (buybacks, higher dividends), both of which should be positive for bank stocks. In our view, banks that emphasize capital return will outperform those that emphasize deployment (particularly larger acquisitions).

Third, the overall benefits of higher earnings and capital could support higher valuations, specifically price-to-earnings multiples, as the market perceives the banks to be either stronger (in an absolute sense) and/or having higher EPS growth potential from eventual deployment. At present, the average forward P/E for the Big-6 is 11.0x, which is lower than historical averages (and the “real” P/E is likely lower as we explain in “Canadian Banks: Are Analysts Underestimating the Recovery (Again)?”).

Amount and Timing: How Reserve Releases Could Evolve (in Charts)

In the next 3-4 quarters, we believe reserve releases for the sector could total between $6 bln and $8 bln, mostly, if not exclusively from the performing bucket[4]. Why? At a gigantic $24 bln, the reserves set aside to absorb potential losses from performing loans has risen by ~80% or ~$11 bln since the cycle began, to reflect the banks’ expectation of rising loan losses at the height of the pandemic[5]. With the worst of the economic downturn behind the banks, we believe this allowance will normalize to between ~$16 bln and $18 bln (in f2022). The charts below highlight a possible trajectory for allowance for loan losses, and our expectation is that this drawdown could be modest at first, increasing once the economy is on a clearer path to recovery.

In our view, the Canadian banks are firmly in the recovery stage of the credit cycle and we believe future share price performance will be supported by reserve releases, capital return/deployment, higher GDP growth and margin expansion (supported by a steepening yield curve). It is also possible – if not likely – that analysts are underestimating the magnitude and velocity of the recovery and that “real” price-to-earnings estimates are lower than they appear.

To capitalize on the ongoing recovery, investors can consider the Hamilton Enhanced Canadian Bank ETF (HCAL), which uses modest cash leverage (25%). Over the long-term, we believe HCAL offers potential for higher long-term returns and a higher dividend yield (currently 5.09%[6], paid monthly). Alternatively, investors could consider the Hamilton Canadian Bank Mean Reversion Index ETF (HCA), which seeks to replicate the returns (net of expenses) of the Solactive Canadian Bank Mean Reversion Index and has a yield of 4.09%[7] (paid monthly).  As the chart below highlights, mean reversion has a history of outperformance versus an equal weight strategy to investing in the Canadian banks.

[1] In that webcast, we predicted that Q4 earnings season would confirm that reserve builds had peaked and that investors should focus on implications of this recovery on the fundamentals.
[2] Formerly known as the Hamilton Canadian Bank 1.25x Leverage ETF
[3] See our insight, “Canadian Banks: Q1-21 Takeaways – One Catalyst Down, Two to Go” (March 2, 2021)
[4] To simplify, the allowance for credit losses for the Canadian banks consists of two buckets: (i) those set aside against loans that have defaulted (“non-performing bucket”) and (ii) those for loans that are still performing but the banks believe are at risk of default (“performing bucket”).
[5] Before the cycle began, the banks had ~$4.7 bln set aside in the non-performing bucket. This has increased to ~$5.7 bln as of the most recent quarter.
[6] As of April 29, 2021
[7] As of April 29, 2021